After an introduction by the author Dangerous Women and Desperate Men: Four Short Stories Of People On The Brink opens with “Blood Red Rings.” Officer Frank Harper is running solo this night and things have been quiet in the zone. That is good as he has lot to think about at home and work. Then, as you knew it would, the night erupts into violence. 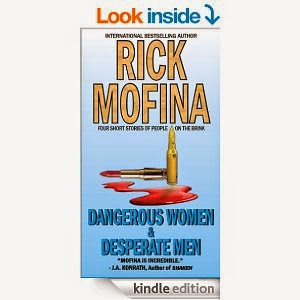 The award winning “Lightning Rider” comes next where Jessie Scout drives an armored vehicle. The crew of Gask and Perez as well as her always have to be on alert because they are a tempting target. They also have to listen to 22 year veteran Elmer Gask expound on his often racist views of the world and their job as they make the rounds in Vegas with the cash. He's a week away from retirement and plans to do so spotless. Always good to have a plan.

It is off to California in “Three Bullets to Queensland.” Ike Decker dreams of going to Queensland in Australia and has the travel brochures. He also has a gun and a job to do first. He is on the trail of one Paco Sanchez who may have gotten away with 1.2 million from an armored truck hit in Los Angeles. It’s time to nab Paco and get paid.

A transcript is the focus of the next short story titled “As Long As We Both Shall Live.” Elizabeth Dalton is being questioned regarding Spenser Dalton and his apparent death. It is believed he fell off in his fishing boat and presumably drowned. Having been married 35 years to the Spenser the prosecutor has more than a few questions for her about Spenser, the state of their marriage, and other issues.

The remaining half of the book in the PDF form I received are excerpts from Six Seconds, Vengeance Road, The Panic Zone and “In Desperation,” with author notes and explanations of the background on same, an author bio, and author praise quotations.

The stories of Dangerous Women and Desperate Men: Four Short Stories Of People On The Brink were all good ones filled with plenty of characters and multiple agendas. Action was present in three of the four reads as the last one “As Long As We Both Shall Live” is isolated to a court room and a court hearing. While plenty of action is implied regarding previous events during the courtroom testimony it is the only story where folks are not out and about doing things during present time. That story was also my personal favorite of the four works. All four good stories are also available at Amazon as solo stories if one would prefer to go that route.

PDF version supplied by the author a very long time ago in exchange for my objective review.

UPDATE---- Barry Ergang has alerted me to the fact that he also reviewed this book here on the blog back in October 2011. That means if I had caught that fact this review would have been part of our famed "double take" feature today. I didn't, so it isn't, but you should still go read Barry's review. If you don't, he will know and you won't like the response. Trust me on this.

Must be....you have the dog obeying.