Friday means Friday’s Forgotten Books hosted by Patti Abbott here. For this special Independence Day edition, it seemed appropriate to consider Bill Crider’s Red¸ White, And Blue Murder: A Sheriff Dan Rhodes Mystery. Like all series, you really should read in order, but if you have not started his books yet, you could always start here. So, put your feet up, grab your Dr. Pepper, and get to reading…… 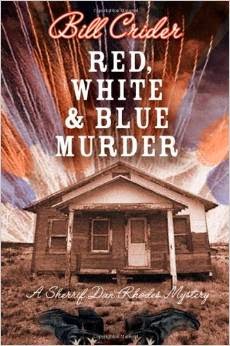 Drought is gripping Blacklin County, Texas right along with the usual brutal summer heat. It hasn’t rained in the last couple of months in this part of East Texas and not much more than nothing the last several years. Stock tanks are drying up, the lake waters are receding exposing more and more of the shoreline, and the grass and trees are shriveling up and dying in a landscape coated with dust and grit. The result is a seared dry landscape that will turn into an inferno with a spark. In a wise move, the annual fireworks celebration for the fourth of July has been canceled though the stands selling fireworks can’t be closed. Even if they should be.


If the summer heat wasn’t enough the prisoners in the jail are complaining and threatening to sue. Then there is Jennifer Loam, the newest reporter at the town newspaper, the Clearview Herald. Fresh out of college, she is looking to make a name for herself and intends to use Sheriff Rhodes as part of a major story. Seems she has been told the good sheriff is corrupt and has bought what she has been told hook, line, and sinker.


She’s wrong and Rhodes tries to set her straight.


Something he will be doing again and again over the next several days as he investigates a string of murders. A building will burn, people will die, and Rhodes will take a beating more than once as he tries again to stop the latest crime wave in Clearview and the surrounding area.


The twelfth book in the series is another god one featuring plenty of action and recurring characters than have become old friends.  Red¸ White, And Blue Murder: A Sheriff Dan Rhodes Mystery is a good read that is fun and should not be taken too seriously.

The 18th book in the series, Half In Love With Artful Death is scheduled to be released on August 12th.

This material was provided by the good folks of the Plano, Texas Public Library System.