Friday means Friday's Forgotten Books hosted by Patti Abbott. I had intended to run another review from Patrick Ohl this week. That review as well as a number of e-books and a lot of other important stuff from the last four years was in my Thunderbird mail program and lost when the computer went bad last week. So, instead, this week you get my review from 2003 on A PAINTED HOUSE by John Grisham. 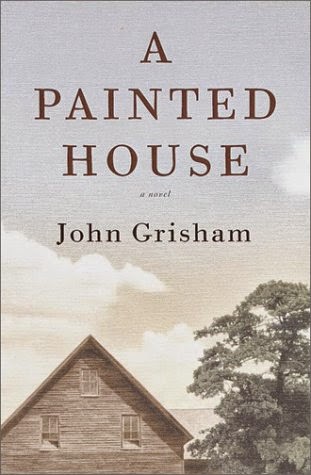 I am always a bit leery and concerned when an author I like attempts something radically different than the previous works. Usually the book is a disaster, the author learns a lesson and gets it out of his or her system, and goes back to what made the author worth reading in the first place. I expected the usual situation in this novel and expected to have to work my way through, reading glasses firmly in place and nose to the grindstone, to finish it. I simply dreaded this book and I could not have been more wrong.

It simply wasn't the case. The man best known for setting off the continuing wave of lawyer style mysteries and thrillers with his second novel, The Firm, creates a powerfully moving human story. This novel is written in a completely different style and is a remarkable change of pace from his other works. The characters are rich and developed from the beginning and as the story evolves, nuances and shading are added, changing each character in subtle, yet powerful ways.

The story revolves around the small world of Luke Chandler, age seven, who lives on a cotton farm in Southern Arkansas with his parents and grandparents. The family rents 80 acres and on a good year, barely breaks better than even. The depression came and never left. The year is 1952, late fall, the cotton is ready to be picked, and his uncle is off fighting the war in Korea. Luke does not want to farm and instead, wants to play ball for his beloved St. Louis Cardinals.

His mother hates the farming life and is determined that Luke will go to college. His father would prefer him to farm, but is willing to go with what Luke's mother wants. His grandparents are equally divided as well, with his grandfather aware that a way of life is passing by. They have rented the acreage for generations and never made enough to buy it outright. Without enough hands to pick the cotton, the Chandlers must rely on the good graces of migrant farm workers.

The Chandlers, like other farm families in the area, go through a yearly ritual of hiring workers as they begin to trickle into town. The farm is deep in debt, cotton prices are down, and the cost of labor is going up. But, the cotton has to be picked and everything else becomes secondary to the harvest. The harvest becomes the dominant theme of the work. A full harvest of a good crop allows them a few extra luxuries while a poor harvest or no harvest means they slide further in debt and face losing the little they rent and own.

The first ones hired are a family down from the Ozarks who have complex problems of their own. The Spruills are a family of seven. There are four boys and a young lady, ten years older than Luke, and he is instantly attracted to her. She is also attracted to him in a big sister sort of way, but Luke reads too much into it. The Chandlers also hire a group of Mexicans from a large pool that is trucked into town every year. Unfortunately for Luke, his friend Juan isn't with the group this year, and he is forced to deal with that fact and make new friends.

Against the backdrop of the unrelenting heat and the backbreaking effort to pick cotton, cultures and personalities quickly clash in deceit, treachery and murder. For Luke Chandler, this harvest will be like no other and will change his life forever. His priorities will change massively as he realizes what is truly important.

This is a pleasant change from the usual Grisham fare of deceitful lawyers, back stabbing judges, and corporate greed. The characters are more diverse, driven by other factors than the worship of a dollar. Grisham shows a breath of characters and writing style not shown in his previous works and I hope this was not a one-time thing. While I thoroughly enjoyed The Firm, and to a lesser extent some of his more recent works, this one was a refreshing breath of air and very enjoyable.

Apparently. I was not aware of the controversy until very late yesterday long after I had this set up. I have yet to see the original comments and instead have just seen stuff commenting on what he allegedly said.