Solstice, a beagle, was raised to be a hunting dog, but she never liked doing that. She has friends that do. One sunny day she decided to go see her hunting dog friends Brownie, Winky and Blinky who lived at an old farmhouse far from Solstice’s home. To do that she hitched a ride on a human’s truck. 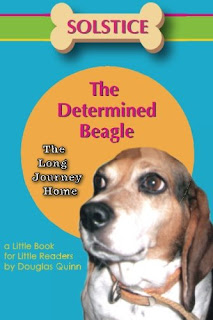 Soon while the mom, Brownie, stays back at the farmhouse, Winky, Blinky, and Solstice go exploring and having fun in the nearby woods. They get separated which is okay at first. It is not long before Solstice is very much lost in the woods. If that was not bad enough, the beagle also has to deal with a storm, three hungry coyotes, and other problems. Solstice is known for being The Determined Beagle and is going to make The Long Journey Home.

Along with a short glossary of words at the back for young readers this cute book tells a great tale of courage and preservance. Part of a series of A Little Book for Little Readers by author Douglas Quinn, Solstice The Determined Beagle: The long Journey Home takes readers young and old on quite an adventure. One that is sure to end well and one the little ones in your life will enjoy again and again.