Friday means Friday’s Forgotten Books hosted by Patti Abbott. I believe Todd Mason is collecting the links this week. If not, I will be home much later today to adjust links as Sandi has a multi hour infusion of IVIG today at Texas Oncology at Medical City Dallas Hospital. For us, Fridays are not just about FFB as they are usually the days we are at the hospital for one thing or another with her cancer fight.

I’m partial to westerns. Probably because my dad was a huge fan of them and they were the first movies I remember seeing on the big screen. Dad was not such a fan of the books, but if it was a movie it was only a matter of time before we were there as a family. I had already planned to read and review this for today and had to laugh when I came across the Halloween reference.

May your Halloween be a safe one for you and yours and thank you for reading my effort today as well as this blog for the last ten years. Things are far different now than when I started all those years ago and the focus has expanded quite a bit by necessity as life has impacted me. But, books still matter and I think reviews do too. 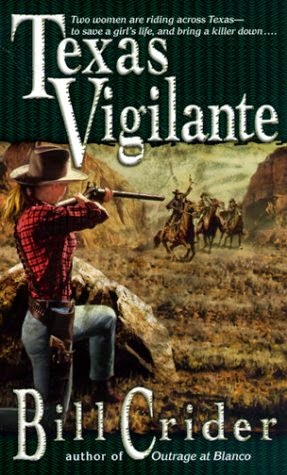 Originally published in 1999 by Dell Books, Texas Vigilante is a sequel to Outrage in Blanco. Some of the events of the first book are mentioned in Texas Vigilante and, by necessity, in this review so you have been warned.

It has been a few months since Ella Taine took over Jonathan Crossland’s ranch after he died. These past months have not been easy. Ranching in Texas is difficult things were such that she had to go into debt to a bank in San Antonio. She didn’t like doing it, but she had and so far things are holding together. She has good help and that includes Lane Tolbert. She recently hired him as he was desperately in need of a job to support his wife, Sue, and his very young daughter. Ellie cares about Lane and his wife a lot, but she absolutely adores Lauire. That smart and beautiful little girl is the daughter Ellie never had and her presence is almost like she is her own child. One of the real pleasures is sitting down and reading with her.

Mr. Crossland had an office with a small library of books by authors such as Irving, Cooper, Melville, Hawthorne, Shakespeare, and others. Laurie is not quite ready for Shakespeare, but the other books she can handle. Their latest read features a skinny school teacher by the name of Ichabod Crane and a certain headless horseman. Neither Ellie, Laurie, or the others on the ranch have any idea that a real life horror is about to be visited upon them thanks to a prison escape and a certain prisoner bent on revenge.

Following the very good Outrage at Blanco isn’t easy, but Bill Crider does it masterfully in Texas Vigilante. Like in the preceding book, the theme of revenge is again a major part of this western as are the choices folks make as they move through life.  Ellie is, by necessity, not as much a part of everything as in the first book, but she makes herself well known in a novel that cracks with a gunshot every few pages. A mighty good western, Texas Vigilante is a good one and quite the sequel to “Outrage at Blanco.

Using funds in my Amazon Associate account I picked this up to read and review awhile back.