Friday means Friday’s Forgotten Books. This week Evan Lewis has link gatherer duties so make sure you head over to his excellent blog for the full list of reading suggestions. Of course, do that after you read Barry’s review below...

THE NIGHTRUNNERS (1978) by Michael Collins 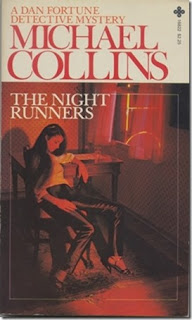 Hired by Wallace Kern, head of the pharmaceutical company Kern Laboratories, to find his compulsive gambler brother Bill, private detective Dan Fortune quickly finds himself embroiled in a far more convoluted case loaded with multiple murders, one victim being an old friend, and an attempt to rescue Kern’s son Bradley from a Mexican prison.

It’s a case whose players include, in addition to the aforementioned personalities, a con man named Nestor Cebellos, his twice-divorced-from-him wife Adelita and her professional gambler father; the Kern wives, who couldn’t be more unlike; a scientist feted at least as much for a magnificent act of heroism as for his research; Kern’s right-hand man; Anna Botha, an attractive young Ph.D. Kern employee who is passionate about rescuing Brad Kern; a deadly pair of Bolivian guerillas; and an assortment of other major and minor characters.

Under his Michael Collins pseudonym, the late Dennis Lynds, known for his literary as well as his mystery fiction, brought that literary sensibility to the Dan Fortune series, which is marked by insightful characterizations, a strong sense of place, and evocative prose:

“A man can’t hide in a small town. Not from others, not from himself. So he comes to the city to hide. From the hunters outside, or the hunters inside.

“Only the city is my land, and if I am the hunter sooner or later I will find my rabbit. I know how to hunt through the solitary rooms and the faceless river of humanity, through the forest of stone and the glare of neon, through the shadows and the silence.”

The one-armed Dan Fortune is as smart and savvy as any fictional private detective who walks the mean streets, and The Nightrunners is a good entry in a superior series.

Derringer Award-winner Barry Ergang’s written work has appeared in numerous publications, print and electronic. Some of it is available at Amazon and at Smashwords. His website is http://www.writetrack.yolasite.com/.
Posted by Kevin R. Tipple at 12:30 AM