“Monday With Kaye” this week is thriller time as Kaye George considers Virus Thirteen by Joshua Alan Parry. Published in 2013 the book is available in paperback and e-book.

This thriller, which was five years in the making, smacks us with a dramatic beginning and doesn’t let up. The story is set in a future world where cancer has been cured and most disease eradicated. Overpopulation and pollution are the biggest human problems now. 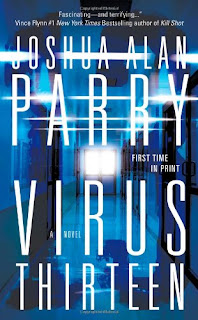 The book opens with a talented medical husband and wife team making a dramatic announcement in Austin, at the University of Texas, about a new, better way to prevent cancer. (The old way is pretty awesome, but expensive.) However, the male half of the team, Dr. James Logan, is unable to continue his speech, falling ill on the stage. He has, in fact, developed a cancerous brain tumor, even though his body is supposed to be cancer-proof.

I don’t want to give too much of the science away, so I’ll just tell you that, to this lay person, the medical part is fascinating and sounds all too possible. Since the author is a medical doctor, I assume it just might be. The plot consists of these two doctors, James and his wife, Dr. Linda Nguyen, and their struggle; Pat Henderson, a man being sentenced to brutal punishment for committing the crime of becoming too fat (illegal in this health-conscious society—in fact, agents of the Department of Homeland Health come and take you away if you gain too much weight); the two DHH agents, Marnoy and Macdonald; and a brand new lethal virus that threatens to wipe out most of the earth’s population, something like a modern-day (or future-day) biblical Flood.

If you like the apocalypse stuff, it's an excellent read.