Before Rizzoli and Isles, before Cagney and Lacey, were McDade and Alvarado. Violet McDade and Nevada Alvarado were a pair of private investigators, partners in the McDade and Alvarado Agency. A greater mismatch of partners you have never seen. Violet was a former circus fat lady, weighing between 300 and 400 pounds. Nevada was a slim, dark-haired beauty who served as her partner's Watson, chronicling Violet's accomplishments in fourteen stories in Clues, Detective Stories beginning in 1935.

Cleve Adams who went on to give us Rex McBride, John J. Shannon, and Bill Rye, all popular hard-boiled heroes in the 1940s, penned the stories. Violet and Nevada were his first pulp series characters. The stories have the hard-boiled elements that characterized his later works.

Both Violet and Nevada are hard drinking, gun-toting women. Violet carries a pair of .45s in her voluminous sleeves and Nevada carries a .32 in a holster above her knee. The solutions to their cases are brought about as much by chases and fighting as deduction. Here, though, their styles differ. Where Nevada will open doors with a smile, Violet will knock them open with her fist. Men fare no better. When Violet hits a man, he stays hit. Here is Nevada describing one such encounter: "Violet hit him. Not hard, just a backhanded sweep across the room." 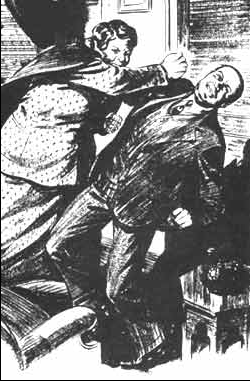 Violet is at least as tough as any of her adversaries, but more cunning and morally flexible. She's not at all shy about using her guns or fists or anything handy to get information out of the bad guys. Nevada is no slouch either in the action department. She drives fast (though Violet drives faster) and brings her gun into play as quickly as her partner.

The relationship between Violet and Nevada has been called by Ron Goulart (The Dime Detectives, 1988) as "teasing racism." Violet often calls Nevada "Mex." Nevada, for her part, is capable of giving back. She sometimes describes her partner to the reader as "elephant." At one point, she responds directly to Violet. "You—you lout! My family dates back beyond the conquistadors and the Spanish grants. Where did you come from? A circus tent!" 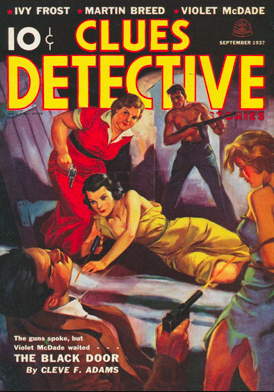 Nevertheless, the two have a fondness for each other. When they are both at the mercy of some bad guys who are about to torture them to find out what they know, Violet asks for one favor, that they don't work on her partner. "Let him play with me if he's just gotta play, but rub her out kinda easy will you?" To which Nevada says, "Save your breath. If you can take it, I can." Needless to say, the torture doesn't happen and the duo make their escape by busting their way out of a burning building and stealing the fire chief's car.

Adams was a prominent figure among California writers, counting as friends Raymond Chandler and Earl Stanley Gardner. He organized a group of about twenty young writers calling themselves The Fictioneers and served as a mentor until the group broke up with the advent of World War II.

A few McDade/Alvarado stories can be found with some diligent searching. You can read one here: http://davycrockettsalmanack.blogspot.com/2014/07/forgotten-femme-fatales-cleve-f-adams.html. You can also find one reprinted in Hard-boiled dames, edited by Bernard A. Drew, St. Martin's, 1986. The series ended in 1938, a year before Earl Stanley Gardner introduced Bertha Cool, who was likely influenced by Violet McDade.

Writers in the central Texas area might be interested in a workshop on "Women and Crime", Saturday, September 5, in College Station, Texas. More information here: http://www.meetup.com/Brazos-Writers-of-Bryan-College-Station/events/223360417/

Mark Troy is the author of The Splintered Paddle, The Rules, Pilikia Is My Business and Game Face.  His website is at http://marktroymysterywriter.com


These two gals sound like a lot of fun. Cagney and Lacey on steroids. Thanks for the introduction to them, Mark.