Review: "Between the Living and the Dead: A Dan Rhodes Mystery" by Bill Crider

Clearview, Texas, in Blacklin County has a little bit of everything. Feral hogs, a Wal-Mart, and, of course, the occasional murder or death by misadventure. It may even be the home of a haunted house if you listen to some folks. Not that Sheriff Dan Rhodes puts much stock in ghost stories, haunted houses, or anything paranormal. 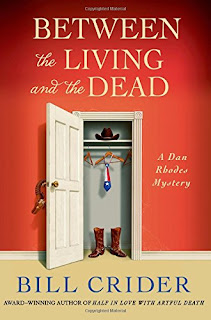 He does put stock in reports of gunfire. Called out late one night to the supposedly haunted house over a report of flashing lights and gun shots, the Sheriff is relived to find no sign of Seepy Benton and his new enterprise known as Clearview Paranormal Investigations. With Officer Rudy Grady as his backup and a summer storm rolling in Sheriff Rhodes would like to believe somebody took the weather for a sign of something nefarious. Unfortunately, that is not what happened as they find the body of Neil Foshee.

The drug business exists everywhere and it certainly does in East Texas. Meth dealer Neil Foshee was well known in these parts for his criminal exploits as are his surviving cousins Earl and Louie. Nearly as bad as their departed cousin, Neil, Earl and Louie are not very bright and are not fine upstanding citizens. That makes them immediate suspects though Sheriff Rhodes, who has given up drinking Dr. Pepper, knows there are others.  A possible suspect is Neil’s former girlfriend, Vicki, who these days seems to have turned her life around and may have the romantic eye of her boss over at the local auto parts store. There are others in a case that has no easy answers and very few clues. Solving the crime isn’t easy and with Seepy Barton constantly going on about ghosts and claiming to be helping out things don’t get any easier. A runaway bull and a couple of other problems don’t help matters, but that is life in Blacklin County.

The latest in a long series is another solidly good read that includes Ivy, Hank, Lawton, Jennifer Loam and a host of other regulars. It takes Rhodes some time to assemble the mystery pieces in Between the Living and the Dead: A Dan Rhodes Mystery and that mystery journey sprinkled lightly with humor is once again what makes this series so much fun. Scheduled to be released August 11, 2015 from Minotaur Books, the read is another good one in a long line of good ones.

ARC was provided by the author in exchange for an objective review.

Thank you for the read! Enjoyed it a lot.