Scorched Noir: A Collection Of Southwestern Crime Tales features eight previously published tales by Yuma, Arizona native Garnett Elliott. That harsh desert landscape with limited opportunities is the setting for these tales. These short stories are set in Yuma, Arizona or towns like it contain a couple of consistent themes that become clear as one reads through the book. 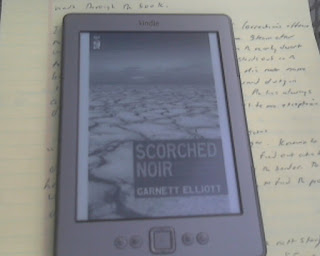 It opens with “Trailer de Fuegeo.” Corrections Officers need somewhere to go to blow off some steam after work. They tend to go out to a certain spot in the nearby desert to drink, smoke, and trade stories. One guard stands out in the battle to keep the inmates in line. His name is Tench and he has done fifteen years of guard duty in a lot of bad places from Texas to Arizona. He has always done what needed to be done and tonight will be no exception.

“Somerton Sangre” features a man named Jesus Vega. Known to do some questionable things when necessary, Mrs. Sandoval wants him to find out who killed her brother. Her brother was killed and dismembered just after he illegally crossed the border. While the way he was killed would indicate drug runners, his sister is sure he was not into that.  She has the money to pay for Vega to look into things and find out who killed him. To do that Vega is going to have to cross into Mexico and try to find the people who transported her brother across.

Jesus Vega is also very much involved in the next story titled “Jesus Contra las Brujas Plasticas” or “Jesus Versus the Plastic Witches. “ While working for a witch lady, Dona Cruz, he is assigned the task of checking out a new and nearby competitor. He needs the money and is used to doing dirty deed for her. Not because of her supposed powers, but the fact that he needs the money she is willing to spend. He does not fear the alleged power of those who claim to see the future, cast spells, and the like. Maybe he should.

The landscape and everything on and in it cooks under the summer sun in Arizona. That certainly is true of those storage places scattered around the area. It was brutally hot when Motorcycle Officer Ray Satoshi and Robert Opp wheeled into a storage lot run by Joe Pender. They are looking for a guy who shot and killed a bouncer at the nearby gentleman’s club before getting away with forty three grand.

People are going out into the desert to commit suicide at a certain rock landmark .Why they are doing that and whether they can be stopped are just two of the issues Shari faces in “Bad Night at Burning Rock.”

In “Snowflake” he has been waiting for the stripper to show up for food at the IHOP when she got off work down the street. Dwayne knows by the way she dances just how class Lisa is. He also figures he can do something to help her career as he is a social media specialist.

“The Greatest Generation” are the targets of Vonda and her partner. They pose as home health care workers and steal everything they can to fund their travel and drugs. They figure it is their right because the seniors took everything with no though to the future. With their next score in sight it is time for Vonda and her partner to to clean up as fast as they can and do what needs to be done to claim their latest prize.

The three women, all with the first name of Debbie, work the ER at the local hospital. “The Darkest of the Debbies” works the job to do what has to be done to keep home together. Way easier said than done.

That's a very complete write-up for Scorched, Kevin. Thanks muchas. And yes, I am damn grateful for air conditioning in the Southwest, especially with August coming!

I would have been dead long ago if not for AC. Enjoyed the book.