Barry is back today for FFB with a review of a book that was not published in the distant past. Make sure you check out the full list of reading suggestions over at Todd Mason's blog.

A clinical psychologist who specializes in treating those who have experienced severe traumas, Dr. Daniel Rinaldi has been working with Kevin Merrick for six months, during which the troubled and previously hospitalized young man has gradually identified with Rinaldi such that he’s trying to become his therapist by stealing small items from the office and “(H)esitantly at first, and then quite blatantly, he’d begun dressing like me…His beard, without my telltale sprigs of gray, was coming in nicely….Then today, when I opened the connecting door to the waiting room for our regularly scheduled appointment, I found Kevin hanging up a dripping jacket next to mine on the standing coat rack.” The jacket is very similar to one of Rinaldi’s own. 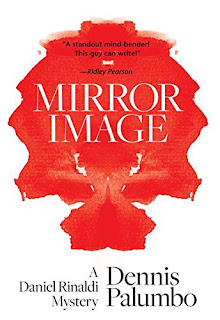 His session with Kevin at the novel’s opening includes a significant revelation about the latter’s past, a revelation that amounts to something of a breakthrough that has been a long time coming. When the session ends, Rinaldi says, “I meant what I said in there. It took guts to reveal such an old, painful secret…” Kevin replies, “Hell, man, I got lots of secrets…”

Rinaldi never learns directly from his patient what they are because, upon departing from the office, Kevin is murdered in the parking garage beneath the building. As a sometime consultant to the Pittsburgh police department, and as a man with the kind of conscience that demands being in on the capture of the murderer, Rinaldi is not about to let up even when it’s suggested that Kevin’s resemblance to him might have made him the actual but mistaken target.

I’m loath to reveal any other details because the impeccably paced and plotted Mirror Image is fraught with multiple twists and surprises I don’t want to spoil. (I advise readers to be wary of comments at sites like Amazon, Goodreads and others of that sort because they’ll learn of some major plot points before they discover them in the novel itself, and thus ruin the surprises.)

Consequently, I’ll only point out that several other murders occur, including one for which Rinaldi is a prime suspect; that an influential, amoral billionaire who might have political ambitions plays a significant role; that Rinaldi develops an intimate but complex relationship with the very attractive Casey Walters, an assistant district attorney; that he has conflicting issues with a district attorney who aspires to a state governorship; and that some questionable business dealings might factor in to some of the aforementioned events.

Author Dennis Palumbo started out as a screenwriter, and is responsible for the wonderful film My Favorite Year, episodes of Welcome Back, Kotter and other television series. He went on to become a psychotherapist himself, so his fictional protagonist, a man who has known severe trauma himself, speaks plausibly about the patients he deals with as well as dealing with some of his own issues.

An impeccably paced and plotted whodunit/thriller with a strong sense of place, the dialogue in Mirror Image is skillfully rendered in the manner I’ve come to associate with the likes of Evan Hunter/Ed McBain and Jeremiah Healey: dialogue that individuates characters and makes them come alive and practically walk off the page. Easily one of the best mystery novels I’ve read in quite a while, and the first in the Daniel Rinaldi series I look forward to reading more of, I strongly recommend it to all but those readers who find moderately graphic (but not protracted) violent and sexual moments, as well as some street language, offensive.

Some of Derringer Award-winner Barry Ergang’s work, including his mystery novelette “The Play of Light and Shadow,” can be found at Smashwords.com and Amazon.com. His website is http://www.writetrack.yolasite.com/

I should mention that the Kindle edition from Amazon is currently available for only ninety-nine cents. If I've piqued your interest with the review, you might want to read the sample to decide whether to pop a buck for the entire novel.

Got my copy, Barry, and look forward to a good read.