Due to recent events, my reviews are very erratic these days. It isn't something that is going to change anytime soon. I am having a very hard time dealing with things and having any focus at all to read and review. The only reason this one is up today is because a rough draft was already written the weekend before I found my Mom. Make sure you check out the full list of reading suggestions at Patti Abbott’s blog. 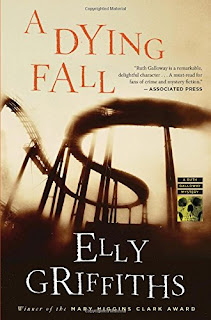 Fifth in the Ruth Galloway series opens with eighteen-month-old Kate answering the phone in that special way familiar to many parents. After that brief moment of levity, the mood turns somber, as Caz has called. Ruth and Carol, who always went by “Caz” back in their university days and still does, haven’t spoken in years.

A friend of theirs and seemly invincible with a great future, Dan Golding, has died in a fire. He was working at Pendle University, which happens to be one of the new startup universities that seem to be everywhere these days. Pendle University would be far removed from Cambridge and Harvard, which is what they all expected. Caz does not know that much, but is able to tell her that Dan Golding died in a house fire that may have been caused by bad electrical wiring.

The shock of his death is soon compounded by the arrival of a letter from Dan. Already upset, his written request to call him about his discovery of bones that could be of the legendary “Raven King” shakes her to the core. What he was afraid of, as he says in the letter, she does not know. Is it possible that that fear played a role in his death? 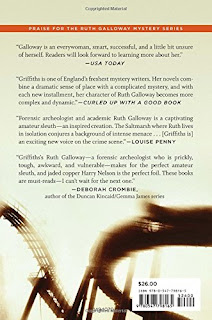 Within days, she is contacted by the Department Chair at Pendleton University, Clayton Henry, and is invited up to Lancashire to examine the bones. Not only can Ruth and Kate have a summer holiday of sorts in Lancashire, she can examine the bones and see where DCI Harry Nelson grew up. Her friend, Cathbad is not only great with Kate, but is eager to go with them and is very willing to entertain and take care of Kate while Ruth does her job. By late July, Ruth, Kate, and Cathbad are off on what, overall, should be a fun trip. Instead, it becomes highly stressful and downright harrowing summer holiday.

A Dying Fall: A Ruth Galloway Mystery is an intense and gripping read. While the main storyline briefly explained above is far more complicated there are several complicated secondary storylines are also present in the work. Characters continue to evolve, as do relationships and situations, and provide much of the secondary storylines in this read. They do not take away the increasingly dangerous mystery at work in the primary storyline and instead work to enhance it. The result is another very good read in a series that is highly recommended.

Material obtained via the Plano Public Library System to read and review.

Sounds like a humdinger! Sorry about your mom, Kevin. I've been boycotting Facebook of late, and am not up on news of my friends.

Thank you, Matt. Been thinking of closing out my FB account. Just too much crap. Wife says this is not a good time for me to be making decisions.