Billed as a Samuel Craddock Mystery Prequel the latest read from author Terry Shames takes readers back decades ago when a young Samuel Craddock came home to be police chief of the small south Texas town, Jarret Creek. It is the mid-80s and the city council wants a younger man to deal with the drug problem. A stint in the Air Force as well as college wasn’t law enforcement experience or training, so the county paid for Samuel to take a three month training course over in Austin. 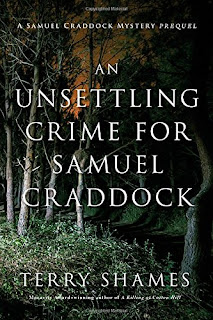 As An Unsettling Crime For Samuel Craddock opens, Samuel gets a call about a very bad situation over in “darktown.” Known as the area where the African Americans live, a tragedy has happened. In the wake of an overnight fire, a certain home there is the scene of five deaths. The fire wasn’t totally responsible. At least one of the victims was shot. It appears that quite possibly all of the bodies are of kids.

Despite the fact the case occurred inside the city limits of Jarret Creek, according to the John Sutherland of the Texas Highway Patrol, he will be handling the case as he claims they have jurisdiction. While that might be true, the more likely scenario is for investigators from the legendary law enforcement agency in Texas, the Texas Rangers to take over. Even when the Rangers arrive in the form of Curren Wills and Luke Schoppe, Sutherland insists on handling the case his way.

Not only is Sutherland arrogant and abusive, he is also clearly racist. It isn’t surprising when Sutherland, ignoring Craddock, goes after the wrong man providing that he also does not care one whit about anything other than clearing a case one way or another. That drug problem Craddock was hired to deal with has its own complications and will take a backseat to the more pressing problem of making sure that an innocent man goes free.

Racism to varying degrees is a constant undertone to this latest mystery. Readers are treated to a different version of Jeanne, Craddock’s wife, as she is very much alive in the read. Also clear are some of the issues that will define Craddock’s legacy in the coming years.

For those new to the series, it would make a lot of sense to begin with An Unsettling Crime for Samuel Craddock. For those of us that have read all of the books, there is plenty of mystery and character nuance to consider in this read. We get to learn how it all began in this highly entertaining read. Prequels often don’t work, but this one does from start to finish.

The series in order of publication and review: