Detective Wayon Gallard has only been a detective for a month so the deceased woman hanging like a scarecrow at the Three Sisters Organic Farm might be a bigger case than he is ready to handle. Though he has been with the department for eleven years, Gallard has been a detective barely a month. Not even long enough to be comfortable wearing a suit on the job. If the case wasn’t complicated enough, somebody opened fire on the crime scene as Deputy Pudge, Gallard, and the two surviving sisters as they contemplated Gladys and the strange note that was pinned to her. 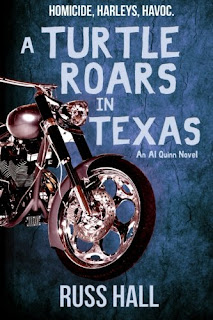 Considering everything that has happened, Sheriff Clayton thinks Detective Gallard is going to need some help and wants Al Quinn to assist and unofficially mentor Gallard. Al Quinn is sixty-two and far too young to be retired in Sheriff Clayton’s opinion. While he tells Quinn that all he wants is for him to show Gallard how to up his detective game, Quinn figures Clayton has something more in mind. The good sheriff frequently has an agenda within an agenda, but what that would be in this case, Quinn has not idea. Things at home are not at all relaxing and since he owes Clayton as they go back many years, he agrees to help for a few days.

Neither Quinn nor Gallard are thrilled to be forced together, but they form an uneasy alliance to work the case agreement. Good thing too as the dead woman isn’t the only murder case they have on their hands in the South Texas Countryside.

Second in the series that began with To Hell And Gone In Texas  is another good read. While billed as an Al Quinn Novel, the read is also about the other people in his life whether it be his brother Maury, his brother’s nurse, Bonnie, or other folks. Those relationships with Quinn, as well as the relationships between each other, are just as much as a part of the read as is the highly entertaining mystery. As was done in the first book, author Russ Hall has set up another complex mystery in the Texas Hill County and challenged readers to figure it out first.

While you could read A Turtle Roars In Texas first, it is recommended that you start at the beginning with To Hell And Gone In Texas. There is some character evolution at work here and less familial backstory in the read, so it is best to read in order. Both books are highly entertaining and mighty good reads.

According to Amazon, I picked this up back in October 2016. I am fairly certain I used funds in my Amazon Associate account to do so. I don’t think it was a free or reduced price read.

The third book in the series is titled Throw The Texas Dog A Bone and was published last August. I have a copy on my eBook TBR pile.