I first told you about this book back in January 2012 here on the blog. More than five years later, it seemed fitting to mention this one again. So, I blew the dust off my review of GAME FACE by Mark Troy today and ran the review again. For more reading suggestions today, make sure to head over to Patti Abbott’s blog. You ought to read her books too.

Texas author Mark Troy brings together in this collection titled GAME FACE eight short stories featuring his signature character Val Lyon. A tough talking wise cracking private investigator that brooks no interference when there is a case to be solved. This former military brat calls Hawaii home.  Along with plenty of the sights, sounds, and history of the islands, readers get strong well written stories featuring complex cases and the always present search for justice. 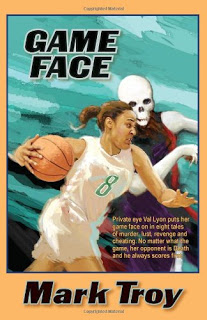 After a forward that explains some of the history behind the character, the book opens with “Teed Off.” Glenn Floeck owns a line of golf shops under the name “Teed Off.” He plans to expand his company to the islands. That means he and his bodyguard, Frodo Baggins, need a car and a driver. Val Lyon can provide both along with plenty of attitude and investigative skills. By working undercover and getting close to him she can get the answers she needs. The answers will come one way or another in this very good story.

Val Lyon is an athlete so there is a sports angle to every story in some way. In “Home Wreckers” star Julie Storm is dead and Coach Sherri Costello, head coach of the Tropical Storm, wants her help.  The players of the women’s Professional Basketball League are not supposed to be dead. But, Julie Storm is very dead and the team, as well as Val Lyon, is in huge trouble.

Next up is “Kill Leader” when Val Lyon has to protect Paula Evangelista from a killer. Paula is something else when she is playing beach volleyball and seemingly scoring at will. She scores off the beach too with a clothing line, a generous sponsor, and work as a model. For somebody, all that is too much and he or she wants her dead.

Val Lyon is at Memorial Arena on the campus of U. C. Santa Christa and back on the court she once played far too many games to count in “The Big Dance With Death.”  Head coach of the female basketball team, Carol Onofrido, needs her help and Val is more than ready to help.  Even if it means the legendary Val Lyon has to go undercover as an assistant coach to stop what appears at first to be stalking while the team works to stay in the tournament.

“Wahine O Ka Hoe” opens with a tragedy in the sea surrounding the island of Oahu. Something went wrong aboard the canoe and now fellow teammate Nani is dead. The medical examiner thinks it was an accident caused by a rogue wave.  Was it? Did someone take advantage of the chaos at sea to kill one of the “Women of The Paddle” or was it an accident?

Readers go from the sea to the air in “Drop Dead Zone.” A constant need in Val Lyon’s life is her need for adrenaline. Because of that, she is onboard a Cessna airplane preparing to make a parachute jump as this story opens. All the hard work of learning how to skydive is about to pay off as she and three others leave the safety of the airplane and begin their fall to earth. Not everyone lands via parachute. Was it an accident or was it murder?

Somebody is swiping the sperm from award winning bulls and owner Doyle Gillispie wants it stopped in “Horns.” He doesn’t know who is the stealing his championship bull sperm, but he knows it is happening and makes it very clear he wants Val Lyon to stop it. The last thing Val wants is this case or this client.  But, you do what you have to do when you need to make the car payment. The championship bulls Gillispie owns and his possible suspect will be at the upcoming rodeo in Maui. So too will be private investigator Val Lyon.

The bites on the surf board Alana Nichols was using indicate a serious shark attack in “Ripper.” There is blood on the remnants of the surf board, most likely blood from Alana Nichols, but there is no body. Terry, Alana’s mother, is convinced she is alive and not a victim of a shark attack.  She has questions, such as what happened to Alana’s computer, and wants Val’s help in finding her daughter.

After eight very good stories, the book closes with Chapter One of the novel Pilikia Is My Business. Pilikia means “trouble” in Hawaiian and public defender Brian Magruder has quite the job for her. I have reviewed the novel before and it is a good one without question.

Val Lyon is an interesting character and one can see how she changes through the years in these previously published stories. Now available as a collection of the single short stories, GAME FACE not only brings them together, it also includes the cover art work from each single. A nice touch that works well in the collection.  Filled with plenty of action, interesting cases, and difficult situations this book is a solidly good read. The book also serves to what the reader appetite for the novel Pilikia Is My Business.


One hopes there will be many more Val Lyon stories as well as a novel or two in the future.


I've been a fan of Mark Troy for a number of years and have had a crush on Val Lyon for just as long. I read the stories in GAME FACE when it came out, but I may just pull out my copy and read them again. They're that good.