Aubrey Hamilton Reviews: The Girl at the Deep End of the Lake by Sam Lee Jackson 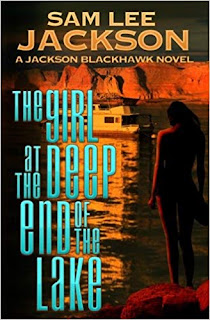 Finding a new mystery or thriller that I like is a great way to start the new year. How have I not heard of these books before? The Girl at the Deep End of the Lake by Sam Lee Jackson (Piping Rock Publications, 2016) is an exciting start in a series featuring Jackson and Blackhawk, two former covert operations agents who moved to unsuspecting Phoenix, Arizona. Jackson sustained permanent injuries in his last fire fight and is now living quietly on a boat, occupying his time with fishing, swimming, and reading. He’s awakened one night by a couple of thugs who are dumping a plastic-wrapped girl in his lake. Jackson has a wide streak of the rescuer in his psyche, and he immediately dives in and drags her out with the help of another lake-side resident.

The girl tells Jackson a story full of holes but sufficient for him to understand she’s associated with one of the local gangs and that she is in danger, even if she doesn’t realize how much. When she disappears the next day, Jackson goes looking for her and the story takes off.

Fast-moving and full of fresh, interesting characters, not the least of which is Jackson himself. (Although, really, the author couldn’t think of a different name?) He has re-invented himself, it’s clear, as one of the law enforcement officials he encounters points out that there is no paperwork or history on him preceding the purchase of his houseboat. He’s quixotic and not particularly observant of laws if they are inconvenient. His problem-solving approach combines the loyalty and ruthlessness of Joe Pike with the wit and affability of Spenser. Also presented for our consideration are a Catholic priest who runs an underfunded women’s shelter in the worst part of the city, a South American consul searching for his granddaughter, a singer in a local night club who wants to fix Jackson up with her best friend, and gangbangers aplenty. There are enough bar-room brawls and shootouts to satisfy the bloodlust of any reader, as well as the obligatory romance.

I enjoyed this book so much I am afraid to pick up the next in the series for fear it won’t be as good as this one. Highly recommended.

Aubrey Hamilton ©2018
Aubrey Hamilton is a former librarian who works on Federal It projects by day and reads mysteries at night.
Posted by Kevin R. Tipple at 1:00 AM