Barry is back for this final Friday in January with another FFB Review. Make sure  your check  out the full list over at Patti Abbott’s blog. 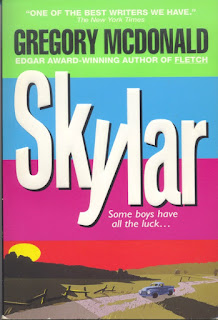 Skylar Whitfield, now in his late teens, has spent his living and working life on his family’s farm at Greendowns (pronounced “Grendons”) County, Tennessee. A strong and good-looking young man who was a straight-A school student with no athletic inclinations, he has no further academic ambitions. He’s quite content to stay where he is, have sex with Tandy McJane, and carouse with his pal Dufus.

When the novel opens, Skylar and Tandy are going at it instead of being where they ought to be: at the party Skylar’s parents Dan and Monica have thrown for friends and neighbors to celebrate the arrival from Boston of their nephew Jonathan, a Harvard student who is recovering from a bout of mononucleosis. Uncomfortable in the southern atmosphere with which he’s as unfamiliar as the partiers would be up north, Jonathan nevertheless tries to mingle with other guests, among them Mary Lou Simes, a popular local girl known for entering and winning beauty contests and Skylar’s former girlfriend.

Eventually Skylar gets to the party and finally meets his cousin for the first time. Their relationship is somewhat edgy from the outset, but along with Dufus, the two ultimately wind up at a favorite local roadhouse called the Holler. Shortly thereafter, Mary Lou Simes comes in with three of the party-goers from Whitfield Farm. Later on, Skylar and others observe her leave the place alone.

The next day, Sheriff Culpepper (a.k.a. Pepp) is notified that disabled veteran Tommy Barker has discovered what appear to be human remains in the woods, remains that are later identified as Mary Lou’s. Not far from her body is a Swiss Army knife, one identified as Skylar’s. Jailed as the prime suspect, Skylar is subsequently broken out of his cell by friends so he can try to find out what actually happened. When Mary Lou’s brother Jack who, with some friends, beat up Skylar, is also found dead, Skylar’s troubles deepen.

It’s been a very long time since I read the late author’s novels about newsman Fletch (the character for whom he’s probably best known) and detective Flynn, as well as a standalone called Running Scared, and I no longer own copies of those novels to consult. But with the possible exception of the standalone, I don’t remember any of them having characters as colorful, well-delineated and complex as there are in Skylar, which is absolutely as much a novel of character as it is a mystery story, and in which McDonald skillfully modulates humor with solemnity. And in which surprises abound.

Strongly recommended to readers who don’t object to some explicit sexuality and occasional raw street language.

Some of Derringer Award-winner Barry Ergang’s work can be found at Smashwords (some freebies here) and Amazon.

I loved the Fletch series, and who can resist a name like "Dufus"? I just might find "Dufus and Skylar's Excellent Adventure" irresistible!