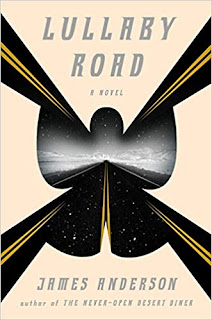 Lullaby Road by James Anderson (Crown, 2018) is another prose poem and unconventional crime fiction story from the author of The Never-Open Desert Diner. It features Ben Jones, a few months after the events of Diner. Winter started early and a snowstorm seems to be brewing on the horizon. Ben is in a hurry to fill his truck when he finds a large German shepherd or husky guarding a small child in the subfreezing wind at the truck stop. The owner has conveniently disappeared, no one else is around, and Ben can’t leave the child in the cold. Both the dog and the toddler, who doesn’t talk, join him in the warm truck so he can get on the road with the day’s delivery of water, propane, and other necessities to the isolated residents of Utah’s high desert. Among them are John, who walks the lonely state highway six months of the year carrying a huge wooden cross, no one knows why. Occasionally Ben stops to talk to John and they share an imaginary cigarette, as carefully rolled and lit and passed back and forth as if it were real tobacco. Another of the damaged but harmless desert rats is Roy, the proud creator of a solar-powered dog house made of used tires. Others who have come to the desert to hide from the world are not as innocuous but they all need the lifeline to the outside that Ben provides.

Searching for the child’s home is only one of the plots in this story. John is struck by a hit-and-run driver and sustains life-threatening injuries. There are of course no doctors practicing in that part of the state and the nearest hospital’s sole emergency helicopter has multiple calls for its services. Getting John to the hospital falls to Ben, as does stopping a shooting and robbery at the local convenience store. At home, his single-parent neighbor gives up on trying to work two jobs and go to college while taking care of her daughter and calls her domineering mother, who brings an aggressive boyfriend when she shows up.

Beautifully, exquisitely written, I focused on the telling of the story with its evocative imagery rather than the story itself for a considerable part of the tale, then began to fix on the people the narrative brings to life. These mini-plots are vignettes wrapped into a single book with the desert setting and the lost child as the threads that run through it from beginning to end. For readers who appreciate good writing and thoughtful portrayals of humanity.