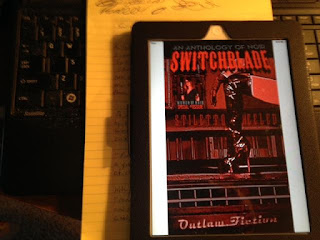 Billed as The Women of Noir Special Issue, and edited by Lisa Douglas who also contributed a poem, Switchblade: Stiletto Heeled is packed with stories of no nonsense women doing what they need to do to survive. Often, survival involves lethality and doing very bad things unto others before bad things are done to them.

The short fiction begins with “Dishes, Dishes, Dishes” by Cindy Rosmus. The last thing she ever wanted to do was wash dishes. The dishwasher in the place is, of course, broken so her first night on the job starts off bad and then gets way worse.

“Ring. Buzz.” by Ann Aptaker follows with a grocery delivery that changed everything. That delivery and the arrival of chocolate chip cookie dough ice cream.

Kelsey isn’t about to easily give up the password in “Concrete Blond” by Susan Kuchinskas. Tommy is what he is so she knows he is doing all this because of her baby sister, Lisa. Game on as he can be played.

While the three preceding stories were in the “Quick & Dirty Flash” section, the next story is all by itself in the ‘Micro Flash” section. “A Shot at Being Ordinary” by Susan Cornford. A tale of less than fifty words, it defied being described. To do so, in any way, would ruin a power tale.

The works of nine authors make up the following “Sharp & Deadly Fiction” section that opens with a tale by Tawny Pike. Her story, “Death Dance in Jacksonino County” features a couple of sleaze ball cops of the lowest order, drugs, and a mom who is doing her best to keep her and her kids surviving. Good thing she always has her knife on the leather thong around her neck. Just part of her plan.

She should have been left alone at her elderly age. Left to live in pace as she was not real threat to anyone. If somebody was going to mess with her, that person should have picked a better tool.  In “Strong- armed and Dangerous” by Charlotte Platt, somebody sent the wrong guy to kill Ida Brown. She knew how to handle the young punk because she had a lifetime of experience. Now somebody in charge has become a problem and it is time to track the problem back to where it started. 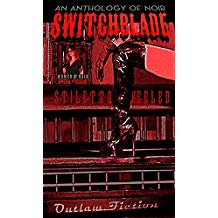 Not everything the woman wears to entertain the kids is fake. In “Priscilla, the Amazing Dancing Pig” by Sarah Jilek, the paying gig was supposed to be the typical kids birthday party. Then the father of the birthday girl took things way too far as the man wanted a souvenir. Now she wants one, maybe more, as well.

Mom is not going to make the same mistakes with her youngest daughter. In “Influencers” by Sarah M. Chen, Mom is still mourning the loss of Lil Bei-Bei who was gunned down at the Hollywood Palladium on Sunset. The hip hop game is a tough one, but Mom is working on getting her seven year old daughter, Bhad Mei, ready now. She is going to be an even bigger, brighter star than her deceased older sister.

Paige Kaneko knows exactly what her brother is and has frequently saved him from a crisis. In “Mayhem & Mahalo” by Bethany Maines he needs her help again. And this time it is bad enough she is going to have to put on a bra. She does not like doing that one damn bit. Blood, dead guys, and a living guy tied up in a bathtub is just some of what is going on thanks to Benjiro latest crisis.

She isn’t going to make it through the night if she can’t outwit the loan shark, Slater. She would not be playing cards for her life in the old hotel casino in Vegas if the other card game a few days earlier had gone right for her and her boyfriend, Carl. It didn’t and now she has a bad hand in more ways than one in “Crazy Eights” by Serena Jayne.

“A Sinner in the Hands of an Angry God” by Carmen Jaramillo follows with a tale where the past has come back to haunt her via a blackmail/extortion attempt. The woman a few folks knew as ‘Freya” isn’t the same person she was twenty-five years ago. Because of the man who goes by the name “Gespenst” and her own personal pain, she did things back then that must never see the light of day. Her new life would be destroyed and a lawyer sending a cease and desist letter is not going to solve her problem.

Ashton Talley is working hard, sexually speaking, and getting nowhere in "Mouthbreather” by E. F. Sweetman. He isn’t any better as a businessman or a boss and Kristi knows it. She just had no idea how little he thought of her until she stayed late one night and he and his buddies came back after a night of heavy drinking. She knows the insurance business and the company will go under if she does not take charge and fix the problem.

She goes by various names and she knows she should have gotten rid of the phone after the last job. She only kept it because Fred Mikes said he might have another job for her. Instead of working for him again, he went and told Cynthia Samson about her. Samson is willing to pay very well in order to have something of hers taken back from her soon to be ex-husband. A dangerous man that she is in hiding from and wants her help in “Hardball” by Lissa Marie Redmond. This story also brings the fiction to a close.

Published last November, the thirteen tales included in Switchblade: Stiletto Heeled are occasionally graphic in terms of dialogue and scene descriptions as one would expect from a crime fiction noir read. In every case women are doing what they need to do to survive in either a world they created or one that was thrust upon them. Consequences of failure are often lethal as are the consequences of freedom.

Switchblade: Stiletto Heeled is certainly not for everyone. If you prefer your violence off page, prefer women to drink tea and solve murders while possibly knitting or running small bookshops, this is not the read for you. If you like violence and alcohol and getting even, regardless of your gender, this is the read for you. Just remember that plans, no matter how good they are, often don’t work out. Or maybe they do as none of us really have any control over anything.

Material was purchased to read and review last November.