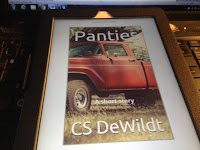 If you have not read the short fiction of CS DeWildt, you may be unaware that the short fiction tends to darkness and noir themes.  Unlike his novel, Suburban Dick, that had dark moments, but was also filled with flashes of humor, Mr. DeWildt’s short fiction tends to be humor free. While A Not Good Teacher has a couple of moments of humor, The Louisville Problem had very little and the deeply disturbing Corbin’s Dreams Take Flight had none. Such is also the case with the short story, Panties: A Short Story.

The boss of the work crew started things off on the wrong foot early one morning by calling him “panties.” Maybe Earl was just generally joking. Or maybe he actually knew something. Maybe all these years later Paul Garth, a kid the narrator went to school with all those years ago, said something. If he talked to anyone, there would be no coming back from that taint. His life would be over. Everything….his wife, Stacy…the kids…everything would be wiped out. Once you got labeled as something, your life is over. Secrets have to stay secret.

A lot is going on in this complicated and solidly good short story by C. S. DeWildt. What is happening and why are just two of the many issues the protagonist is dealing with in Panties: A Short Story. A noir story so one knows it will not end in happiness.

Material purchased by way of funds in my Amazon Associate account last August in order to read and review.