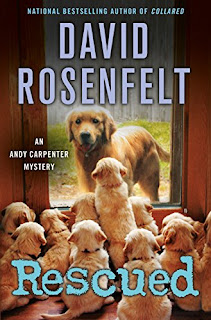 Rescued by David Rosenfelt (Minotaur, 2018) is the 17th Andy Carpenter legal mystery. The titles of all of the books in this series are dog-related and dogs are front and center in this one. Key to the plot is the common practice of transporting large numbers of animals at risk of euthanasia in rural Southern shelters to the Northeast where homes are found for them. The transporters are generally volunteers coordinated by another volunteer with great logistical and planning skills.

Andy Carpenter is a defense lawyer who is happy not to work. He spends his days with his wife Laurie and son Ricky and with the dogs at the rescue he runs with his friend Willie. So when Laurie asks him to take on the defense of a man who’s been accused of murder, he’s reluctant. When he learns the victim was driving a truck of 70 shelter dogs to new homes, he’s appalled. When he learns the accused is Laurie’s former boyfriend, he’s looking for the door. Only Laurie’s insistence gets him involved with a case that appears on the surface to be open and shut.

As usual with this series, there is far more going on than immediately meets the eye. Never mistake these books for amusing and fluffy stories about doggies. Despite the light-hearted wisecracks that Andy and his friends exchange and Andy’s besottedness about his animals, this is a well-plotted mystery with plenty of courtroom drama and unpleasant people full of nefarious intent who have found a sickeningly realistic way of manipulating the stock market to their advantage.

David Rosenfelt is a committed dog rescuer who has found time to create and document a group of likable, credible characters that represent various parts of the U.S. judicial system. His other books include stand-alone thrillers and a new series featuring a New Jersey state police officer. His biographical story that describes his family’s move with some 25 dogs from southern California to Maine, Dogtripping (St. Martin’s, 2013), received a Library Journal starred review.