THE BLACK-EYED BLONDE: A Philip Marlowe Novel (2014) by Benjamin Black 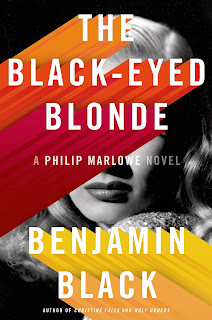 A private detective named “Philip Marlowe” is hired by Clare Cavendish, the wealthy daughter of perfume magnate Dorothea Langrishe, to find a man named Nico Peterson. Clare, the beautiful blonde of the title with whom “Marlowe” is almost instantly smitten, gives the impression that she and Peterson were lovers. Although married, she says she and her husband have an arrangement—which is to say an open marriage. “Marlowe’s” investigation reveals that Peterson is dead, the victim of an automobile accident. Clare admits she knows that, then tells him she spotted Peterson, alive and well, in San Francisco, and wants “Marlowe” to find him.

As events progress, “Marlowe” is set upon by a couple of Mexican thugs; threatened by a local crime boss who wants a certain item recovered; tortured by the “butler” of the exclusive Cahuilla Club at the behest of the club’s owner, who has a vested interest in the investigation; and is ultimately no more surprised than I was by the “surprise” revelation that’s a major part of the story’s solution. I said to myself at the beginning of Chapter 23 (of 25 chapters) that if a certain party was revealed to be involved in or behind all of this, as I’d come to suspect, I’d be seriously irritated. Irritation became fury when my suspicion proved correct.

If you’re wondering why, in the preceding paragraphs, I bracketed Marlowe’s name with quotation marks, it’s because the pallid, pathetic excuse in this disaster of a novel has as much in common with Raymond Chandler’s character and style as Mickey Spillane’s has with Jane Austen’s. If ever there were a cautionary tale about the inadvisability of major publishers signing first- and second-tier mystery writers to continue series about classic characters by esteemed authors, The Black-Eyed Blonde is it.

Begin with the admission that I started this novel with a couple of biases and a great deal of skepticism. A hardcore Raymond Chandler fan since I first discovered him in my early teens some roughly 57 years ago, he’s the author of my favorite novel, independent of genre, The Long Goodbye. (Although I might rate Huckleberry Finn and The Sound and the Fury somewhat  above it in the “Significant Literature” category, I’ve only read those three times each, so far,  whereas I’ve read The Long Goodbye  six times—so far.) Why does one read—and re-read—Raymond Chandler? Definitely not for plot—and by Chandler’s own admission, plot was far less important to him than were character and style. 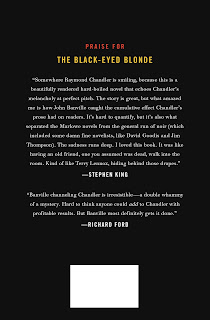 Benjamin Black, pseudonym for acclaimed Irish author John Banville, isn’t even close to Chandler, his own arguments notwithstanding as far as I’m concerned: https://www.theguardian.com/books/2015/jan/30/writing-a-new-philip-marlowe-black-eyed-blonde and https://www.theguardian.com/membership/2015/feb/09/rebooting-raymond-chandler-five-things-we-learned-from-john-banville Serious, big-time, major-league spoiler alert: unless and until you’ve read The Big Sleep and—above all—Chandler’s masterwork, The Long Goodbye, avoid this lame excuse for a “Philip Marlowe” novel. Banville gives away some key information about The Big Sleep, and utterly and unconscionably ruins The Long Goodbye by revealing most of its key points.

Moreover, he gets a number of things absolutely wrong. Marlowe, despite once having been an investigator for the D.A.’s office, is renowned for not getting along with many cops. But among the few relatively close friends he’s ever acknowledged is Bernie Ohls, chief investigator for the District Attorney at the time of The Big Sleep and Assistant Chief of Homicide in the Los Angeles Sheriff’s Office in The Long Goodbye. In The Black-Eyed Blonde, Banville makes their relationship completely adversarial while having “Marlowe” get along more cooperatively with Sergeant Green than his actual counterpart did or probably would have in The Long Goodbye. Another mistake Banville makes with regard to the latter novel is that Sylvia Lennox is beaten to death and that a bullet is found in her skull. Beaten to death, yes; skull shot, no.

As you may have noticed in the third paragraph, I’m more than a little peeved, to put it charitably, by major publishers who try to cash in on long-established authors and their series. For instance—and I’m sure I’ll be branded a heretic by his legion of Spenser-series fans—the grossly overrated Robert B. Parker was commissioned by Putnam to create the Chandler cash-ins Poodle Springs and Perchance to Dream, which rank high in my Oh, Puh-leeze! Are You Kidding Department.

Argue though some might, I think Chandler’s style was among the most influential of Twentieth Century American authors. He had (and probably still has) many an imitator, particularly among those writing hardboiled detective stories, and at least one esteemed parodist, S.J. Perelman, who wrote the memorable “Farewell, My Lovely Appetizer.” When it comes to Chandler’s more outright stylistic imitators, look to Howard Browne writing as John Evans in his Paul Pine series of mysteries, to Roy Huggins’s The Double Take, and especially to Keith Laumer’s Deadfall, the single finest pseudo-Chandler novel (and homage—it’s dedicated to Chandler and Marlowe) I’ve ever come across. The hero, private eye Joe Shaw, was more than likely named for the esteemed editor of the famed Black Mask magazine where Chandler’s work debuted. I’ve maintained for ages that if you were to give a copy of Laumer’s novel with its author’s name deleted and claimed it was a previously undiscovered Chandler, the latter’s most devoted fans would, based on both style and substance, believe the falsehood.

I seriously have to question how much of Chandler’s work Olen Steinhauer, who reviewed this novel for The New York Times, has actually read, let alone absorbed. Those who have read and absorbed both can make their own determinations. As far as I’m concerned, both publisher Henry Holt and Company and John Banville, independent of the hair-coloring of each, rate black eyes for The Black-Eyed Blonde, an eminently and deservedly forgettable example of corporate whoring which should never have come to light in the first place. May there never be a follow-up!

Derringer Award winner and writer/editor Barry Ergang’s own Chandler homage is the poem  “Nocturne,” which can be found in Dances of the Disaffected at Amazon. Some of his additional work can be found at Smashwords and Amazon, among both of which is a definitively non-Marlowe-like detective novelette, “The Play of Light and Shadow.”