Earlier this week Ben Bouden at his Gravetapping Blog (a site you should be reading and following if you are not already) reviewed EASY GO by John Lange aka Michael Crichton.  I am pretty sure I never read it so I now have a copy of that one as well as several others by him thanks to the good people of the Dallas Public Library System. While requesting several titles, I realized that I had read at least one of them--- ZERO COOL. I reviewed it way back in 2008.  So, for today, I blew the dust off that review and remind you again that you should read ZERO COOL. You should also read Ben’s review of  EASY GO. And, you should go read the full list of reading suggestions for this week over at Patti’s blog. I can think of some more stuff you should do, but I will quit while I am ahead. 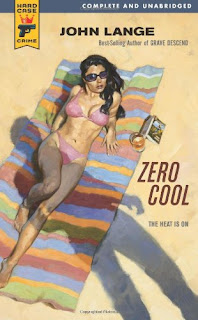 For twenty-six year old Radiologist Peter Ross the trip to in mid July 1967 is supposed to be a relaxing vacation. While attending the annual meeting of the American Society of Radiologists in where he is slated to present a talk, he also plans on spending time in before and afterwards. Rumor has it that the place is full of English and Swedish girls this time of year and all are "…deeply passionate, fabulously attractive, and incredibly sexy." (Page 14)

However, his fabulous vacation begins to go odd shortly after his arrival. First, there was the distinguished gentleman looking for him in the hotel who ascertained he was there and yet strangely made no contact. Then, while on the beach at Tossa del Mar where he met a very attractive young woman from by the name of Angela Locke, another man highly agitated runs up to Dr. Ross. He begs Dr. Ross to talk in private and once able to do so insists that he must not do the autopsy and that he must leave immediately.

Dr. Peter Ross isn't qualified to do one and has no idea what the man is talking about. Beyond that, he has no plans to go anywhere. The man quickly becomes angry and throws the final parting comment, "If you do the autopsy, we will kill you. Do you understand? Kill you." (Page 23)

And so his nightmare begins. Powerful conflicting interests are at work that see Dr. Peter Ross as a sacrificial scapegoat for their aims and objectives. He isn't thrilled with his death being the only option proposed by so many and begins to try and extricate himself.

As in most cases with HHC, this is another fast fun pulp fiction style read where occasional violence is the norm and implied threats of violence are constant. Once again the hero, in this case Dr. Peter Ross, is dashing to and fro when he isn't being plucked off the street or accosted in a hotel room by various competing forces.  The women are beautiful and in all likelihood trouble, the locations exotic, and the violence and threats of violence are always little more than a sentence away. Simply put this is another highly entertaining read from the author and publisher.

I read quite a few of Crichton's "John Lange" novels decades ago, and enjoyed all of them.