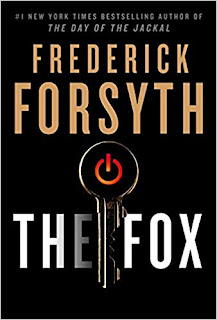 Frederick Forsyth announced his retirement from writing thrillers in late 2016 and then had an idea for another book based on stories about British hackers Gary McKinnon and Lauri Love. The Fox (G.P. Putnam’s Sons, 2018) lacks some of the intricate subplots of the earlier thrillers but Forsyth is still on the top of his storytelling game.

Computer specialists at Fort Meade, Maryland, were more than a little startled to discover that someone had broken into one of the most protected IT systems on the base. Even more surprising to them is that no damage was done, when it could have been devastating. Attempts to trace the hacker led nowhere so they waited and watched until they saw a similar break-in at a world bank, which gave them enough information to eventually track the site of the hack to a private residence in Luton, a suburban town north of London, to England’s considerable embarrassment.

Convinced it was the site of a hidden terrorist cell, British and American SAS and SEAL forces mounted a night-time takeover of the house to find Sue and Harold Jennings, housewife and accountant, respectively, and their two teenage sons Luke and Marcus. The elaborate computer set-up they expected was actually Luke’s cobbled-together network in the attic, where he spent all of his time. Neither of his parents had the slightest idea that he was roaming across the internet and entering highly classified databases at will.

Rather than prosecute, the British and U.S. government decide to use Luke’s skills against some of their adversaries. They relocate the family to an isolated research laboratory, where Luke’s computer system was replicated and his attention successfully directed to various targets, to the great chagrin of some world powers.

Forsyth has not lost his gift for creating lively characters in a few words nor his touch for conveying action. His snark about various world powers is on full display. The cast of characters and organizations in the book is five pages long; fortunately I did not feel the need to consult it. A good read!