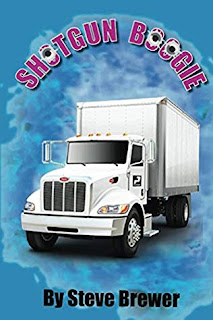 I have been a fan of Steve Brewer and his writing for a long time, since I found him and his books about Bubba Mabry on the online mystery discussion list DorothyL. He’s a versatile crime writer, producing stand-alone novels and novellas, short stories, and mystery series, all of which seem to be set in the Southwest. As if giving rabid bookworms more than two dozen full-length books to appease their need to read is not enough, he and his family recently opened a bookstore in Albuquerque. Excellent news, since there cannot be too many bookstores. But perhaps I am biased.

Shotgun Boogie (CreateSpace, 2016) is the first book by Brewer about Jackie Nolan. Jackie works for Howard Bell, owner of Duke City Truck Salvage in Albuquerque. Among the legitimate trucking assignments Duke City Truck Salvage receives are a few under the table arrangements that involve Jackie’s ability to drive a semi and Howard’s ability to offload stolen goods. Jackie is desperate for money and not in a position to turn down these illegal gigs. Her mother is failing and unable to stay alone; the cost of caretaking is skyrocketing but Jackie is determined to keep her out of an institution.

So when Howard asks her to boost another semi at the same place she stole a truck full of cigarettes the night before, she’s appalled at the risk but in too great a need for the extra money to turn it down. She knows the cargo has to be contraband of some sort because Howard offers her twice her usual rate to steal the truck, but he assures her it’s not drugs and not people, so how bad can it be? After Jackie steals the truck and inspects the contents, she discovers the load consists of U.S. guns and ammunition that have been stolen from an Army base. That’s how bad it can be.

Jackie has no intention of turning these weapons over to anyone but the U.S. government. She’s trying to figure out how to do that while staying anonymous when suddenly all kinds of unsavory people are after her and Howard. Neither the Mexican gangster who commissioned the theft nor the various hooligans who expected to acquire a small munitions depot appreciate the disruption to their plans. Jackie learns quickly how hard it is to go on the lam with a mother suffering from dementia in tow.

Despite Jackie’s illegal activities, she is a sympathetic character who is caught in a vise by the need to care for her mother. She is also quick-witted and resourceful, escaping time and time again by a hair. Fast-moving, violent, and action-packed, an absorbing read for a cold winter night.