Jeanne Reviews: In Want of a Knife by Elizabeth Kane Buzzelli

Please welcome back Jeanne of the BPL… 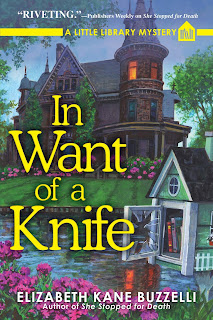 Dear, In Want of a Knife,

I’d never read any of the Little Library Mystery series when I picked you up, but I like libraries and librarians and Jane Austen so I thought this one would be a slam dunk.  The jacket copy indicated that Jenny Weston “amateur sleuth and little librarian” is drawn into a new mystery after the body of a young girl is found near a highway and then another girl disappears.

The book started off well enough, with the discovery of said body, first thought to be the victim of a hit and run.  She is identified as a girl who had been reported missing several days earlier, but oddly enough she is dressed in an old fashioned long white dress. The disappearance of another girl sets Jenny on the trail. . . sort of.  Actually, it’s Zoe Zora, a local author famous for her incisive and witty commentary on noted women authors, who takes center stage as far as I’m concerned while Jenny seems to spend a lot of time moping about some broken relationship and trying to avoid Tony who is obviously interested in her.

With the introduction of Fitzwilliam Dillon, rich man who has just bought a house in the neighborhood, and his friends Charles Bingman and Nathan and Delia Wickley, I was sure I’d be in for some Austen fun.  However, it turns out that Zora finds Austen’s women characters to be spineless creatures only focused on finding husbands.  This was discouraging, but I pressed onward. There’s some mirroring in a mother who is throwing her daughter at the wealthy Darcy, er, Dillon—but he is only intrigued by the infuriating Elizabeth, er, Zoe who is a little person like himself.

The mystery plot is well done, and the reader quickly realizes that there are dark and deadly intentions here.  Part of the story is narrated by Cammy, the second kidnapped girl, who is trapped and cold, waiting for her unnamed captor.  This ratchets up the tension nicely and gave me a break from morose Jenny and the townspeople bickering over how to spend a proposed $2 million dollar gift that Dillon has promised the town. I probably would have appreciated the plotting more if I hadn’t been distracted by the Jane Austen trappings.

As I said, dear In Want of a Knife, it’s me not you.  I wanted a book that appreciated Jane  Austen while playing fondly with the characters and I didn’t really find that here.  There was a tongue in cheek comment at the end when the women congratulated themselves on not being like Austen’s women even as some of their more unpleasant behaviors indicate otherwise. That’s how it seemed to me, anyway. But it’s not your fault that my expectations didn’t align with what you are.  Every book is not for every reader.

Part of the problem might have been that I hadn’t read any others in the series to be properly introduced to your characters.  I do seem to be gifted with the ability to pick up exactly the wrong book in a series when I don’t read in order (I sniffed at Nero Wolfe’s claim that he never left his brownstone when in the first two books I read he was travelling; but I persevered and became quite the fan) so perhaps that was it.  I just picked the wrong book in the series to start.

I will go back and read an earlier one but if you are no kinder to dear Emily Dickinson than you were to Jane, I will conclude you are not my cup of tea.  And that’s okay.  Books I love have been met with indifference from folks to whom I heartily recommended them and I haven’t been enchanted with books recommended to me.  That’s the way it is, and the way it should be.