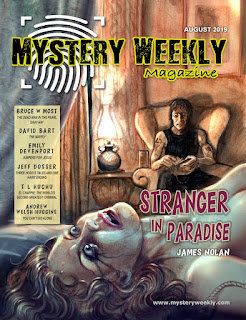 Mystery Weekly Magazine: August 2019 issue begins with “El Chappie: The World’s Second Greatest Criminal” by T. L. Huchu. He might be the second greatest criminal, but, he clearly is the biggest talker. It can’t be referred to as an “interrogation” when the suspect is freely sharing all of the details of his life in crime.

Audrey finds herself in a bad situation in “Stranger in Paradise” by James Nolan. She knows where she is and she also knows nobody else has any idea of her location and situation. This was not how her visit to New Orleans was supposed to go at all. She is going to have to take charge of her own rescue.

So too will the primary character in the next story “The Mayfly” by David Bart. He faces a certain death as terminal cancer is waging a war on his body. He has one final thing to do for himself as well as his sister, Phoebe, to set things right.

It appears that Bo Hendrickson is going to lead his followers to the Praying Hands sculpture and encourage the devoted to take the eight thousand drop leap of faith. It is not the first time there has been a cult-suicide and no doubt won’t be the last. Reporter Bell is being forced to cover the story by Editor Bill Thomas and does not like it all. As the boss bluntly pointed out, “You’re a reporter. So go report.” Bell does and that is the crux of the tale “Jumpers for Jesus” by Emily Devenport.

Weegee The Famous is known for his photographs. He takes pictures of various things including crime events. He sells those pictures to the tabloids and business was good. Thanks to the ongoing mob wars and carnage, the price for his photographic efforts is going down. He needs a new angle and may have found one in “The Dead Man In The Pearl Gray Hat” by Bruce W. Most.

Kyle Hogg had thought that if he made it safely home to his worn out Winnebago parked at the Sunny Acres trailer park in Tulsa he would be home safe. He was wrong in “Three Hogg’s Tale And One Hairy Ending” by Jeff Dosser.  Lawrence Talbot, also known to one and all as Harry Larry, was waiting and wants his product or the money.

“FanFarewell” by Laird Long is the selection for “A You-Solve-It” by Laird Long this month. The body was found in the pond just to the east of the old factory and Detective Hunter and Constable Mancini are on the case. Sam Trusco is the dead man. The pond was not the kill site. When and how he died are just two of several elements in this story that readers have to put together.

The answer to the July “A You-Solve-It” case titled “Shut And Open Case” brings this issue to a close.

As has been present in each issue from the start, Mystery Weekly Magazine: August 2019 issue continues the tradition of a solidly good mix of writing styles, characters, and interesting mysteries. Mystery is a wide canvass and such is the case here resulting in another higher entertaining issue.

Have a wonderful Thanksgiving, Kevin!

Thank you. You too, sir.