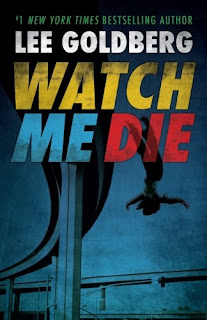 This review first appeared here as part of FFB in May 2012. More than seven years later it seems like a good time to run it again for the second time. For the full list of reading suggestions this final Friday before Thanksgiving, check out the full list at Todd Mason’s Sweet Freedom Blog.

At twenty-nine, Harvey Mapes has largely resigned himself to having little in the way of a life. Having been a security guard in an exclusive Southern California community since he was in college, he spends from midnight to eight a.m. six days a week in a stucco shack outside the gates of the Bel Vista Estates, watching a monitor to make sure people don't run the stop sign at an intersection within the community. If they do, he's required to write them "courtesy tickets" when they come through the gate.

The job gives Harvey a lot of time to read, and his favorite genre is the detective story—specifically, the hardboiled private eye story. He's also fond of catching reruns of old private eye series on the TV Land channel. Among his favorite detectives, literary and televised, are Travis McGee, Shell Scott, Elvis Cole, Spenser, Joe Mannix, Magnum, and Dan Tana from "Vega$." His fantasy is to be a private eye and have a life as fraught with excitement as theirs are.

Fantasy becomes reality when Bel Vista resident Cyril Parkus hires Harvey to trail his beautiful wife Lauren and report to him about her activities. It doesn't take long to discover that Lauren is being blackmailed, though Harvey doesn't know the blackmailer's name or what he has on her. His pursuit of the man earns Harvey a severe beating, but it doesn't dissuade him from eventually learning the man's identity. When he reports what he's discovered to Cyril Parkus, Parkus says he'll take it from here. This doesn't sit well with Harvey because, to his way of thinking, the case has just gotten under way, and his literary and television idols wouldn't quit at this point in a case. Thus, thinking he can help both his erstwhile client and his wife, he once again trails Lauren. When she drives to a freeway overpass, gets out of her car, climbs onto the railing, looks directly back at Harvey, and then dives into the traffic below, Harvey can only stare back in shock and horror. 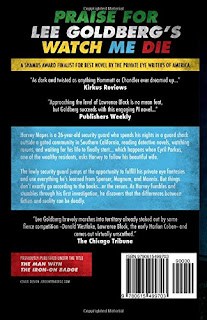 Beset with guilt, despite realizing with the rational part of his mind that he's done nothing to feel guilty about, and again because his fictional heroes wouldn't leave a case unresolved, Harvey is determined to uncover the secret that drove Lauren to her death and, if he can, bring her blackmailer to justice. His quest takes him to Seattle and other areas of Washington state, where he encounters murder, a variety of quirky characters, and some stunning revelations.

I've read and enjoyed a number of the novels Lee Goldberg has written based on the TV series "Monk," so I know he's adept at writing humor. There is a good deal of that in Harvey Mapes's first-person narrative, one full of self-deprecating remarks and wry perspective on his particular world. What I initially thought I was getting in Watch Me Die was a fluffy screwball comedy about a private eye wannabe who'd blunder his way through a "case" populated by idiosyncratic characters and wacky events. What I got was far different: a love story (yes, it is that, too) that becomes very dark, violent, and sometimes flat-out nasty; that is as much about Harvey's maturation and insights into himself and others as it is about solving a mystery. Goldberg skillfully manages the delicate transition from levity to gravity as Harvey probes—and sometimes occasions—events.

This well-paced page-turner is not a cozy, so readers who dislike raw language, sexual situations, and onstage violence will want to avoid it. Those who can handle those elements will be rewarded with a story that amuses, surprises, and lingers in the mind long after it ends.

Among other works, Derringer Award-winner Barry Ergang's own impossible crime novelette, The Play of Light and Shadow, is available at Amazon and Smashwords as is his recently released book of poetry, Farrago, and other entertaining reads. For more on Barry’s books as well as his editing services, check out Barry’s website.