As Making It Rain In Texas: An Al Quinn novel opens, the summer heat is on in the hill country of Texas and the seared brush just needs one spark to turn the woods around Lake Travis into a blazing inferno. Al is adjusting to having yet another person in his house as Maury and Bonnie’s new baby is making his presence known in more ways than one from time to time. With his brother Maury there, Bonnie, and the baby, as well as Fergie, Al’s girlfriend, and Tanner, the dog, there is a lot more activity at home than Al ever expected during his retirement years. Even going fishing to get some alone time is problematic.

This summer morning, instead of being able to sleep in, Al and Fergie are very much awake and Bonnie is very upset. The baby is fine. She is upset because somebody stole the donated funds for her charity group. They have been raising money funds to fight cancer. The plan was to donate the monies to a local hospital where Bonnie and Maury work. The charity hired somebody that seemed to be good at raising funds for charities. Cynthia Standerblum came highly recommended. Now 270K is gone and she has vanished.

Because Bonnie and Maury were involved, it means that not only does the hospital not get the donated funds, they will probably be fired. Bonnie has begged for their jobs and has told the hospital that Al and Fergie will look into it now so they don’t have to wait for the office of the attorney general to get involved. Local law enforcement is overwhelmed with other cases and the attorney general is going to take months to do anything if they ever do. Bonnie and Maury need Al and Fergie on the case now to have any chance to get the fraudster caught and recover the money. 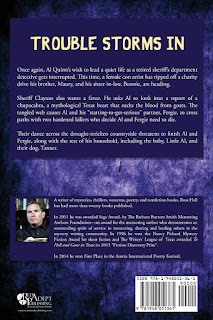 Bonnie isn’t the only one asking Al for a favor. Al’s old boss, Sheriff Clayton, calls with a problem and asks for a favor as his on staff detectives have a half dozen or more higher priority cases. The problem should be relatively easy to solve. Not only is that a good thing, what needs to be checked out is over in Al’s area. On the downside, favors for Sheriff Clayton often turn into damn near lethal encounters for Al and anyone nearby. But, on the face of it, this one sounds simple enough and should be easy to deal with quickly. It goes without saying that Al is going to do it though it is not on his priority list as the scamster is a bigger issue

Those twin storylines have their own ramifications and things get complicated and escalate quickly in Making It Rain In Texas: An Al Quinn Novel by Russ Hall. This is the fifth book in a highly enjoyable and well established mystery series. The hallmarks of humor, mystery, and plenty of mystery are all present here making this another good one in the series. As this book builds on the previous books in the series as well as the book of short stories, readers are reminded once again it is best to read these in order.

Picked this up in digital format to read and review using funds in my Amazon Associate account at the far lower prepublication price.