Aubrey Hamilton Reviews: The Clockmaker by Jane A. Adams 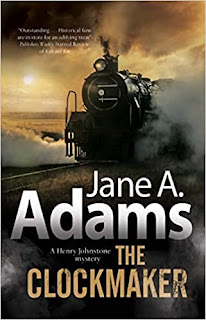 Jane A. Adams is an active British mystery author with some 30 or 35 novels to her credit. She has created five series characters since 1995, all set in England: Mike Croft, a detective inspector; Ray Flowers, a former police sergeant turned private investigator; Naomi Blake, a blind ex-policewoman; Rina Martin, an actress who played a private investigator in a television series; and Chief Inspector Henry Johnstone of Scotland Yard, beginning in the late 1920s.

The Clockmaker (Severn House, 2019) is the fourth title in the Johnstone series. Chief Inspector Johnstone met clockmaker Abraham Levy on an earlier case, and now Levy has come to him for help in locating his nephew. Joseph Levy was last seen on 3 February 1929 boarding a train in Lincoln to return to his home in London. On 20 February Levy approaches Scotland Yard, believing his family’s concerns have been dismissed by the local police and that his nephew is dead. Johnstone points out that he only works on homicide cases and a missing person does not qualify but he and his sergeant Mickey Hitchens agree to review the file. About a week after Johnstone asked the various police forces along the train line to look again for any trace of the nephew, the clockmaker’s prediction turns out to be right and Joseph Levy’s body is found near where he was last seen.

The subsequent investigation is hampered by Joseph’s family, who are evasive about their business affairs, and the inexplicable interest of the leader of the gang who runs the area where the clockmaker lives and works. Then Johnstone discovers Abraham Levy has something of a reputation as a rabble-rouser, consorting with known Communists and union organizers, which makes Johnstone wonder about his associates. An interesting subplot involves Johnstone’s sister who tries to disentangle her husband’s investments to protect them from the coming economic crisis.

A well-written, methodical police procedural that speaks to the time and the place. I was particularly impressed with how subtly Adams sets the stage. Less experienced authors reference newspaper headlines or songs on the radio to evoke an historical period. Adams is far more indirect, with a secondary character mentioning the names of Germany’s governing officials in passing and another making a glancing allusion to how recent World War I was. The train ride from Lincoln to London is described as long by more than one character; however, the distance between the two is about 150 miles, some three hours by automobile in 2020. The blatant anti-Semitism, the gangs presiding over neighborhoods and demanding protection payments with the compliance of the police, the anti-unionism, all are woven into the background of the investigation, describing the timeframe with a minimum of detail. For readers of historical mysteries and police procedurals.