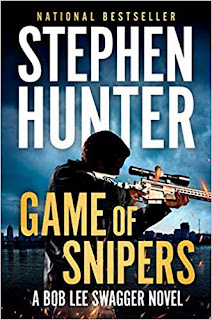 Game of  Snipers by Stephen Hunter (Putnam, 2019) is the latest thriller in his series about Bob Lee Swagger, a retired sniper of renown in certain circles. Stephen Hunter is a Pulitzer Prize winner and the former film critic of The Baltimore Sun and The Washington Post, with some 25 novels to his credit. He is also a gun and shooting enthusiast, which shows clearly in this particular book. There is a significant amount of data about the technical aspects of long-range shooting and the work of rewickering ammunition to ensure that it travels the maximum distance possible.

Bob Lee Swagger is enjoying the scenery from his front porch in Idaho when a woman unknown to him arrives to request his assistance in finding and assassinating the Middle Eastern sniper who killed her son during his deployment to Baghdad. Her account of her efforts to locate the sniper is startling, as it involves multiple trips to the Middle East after the CIA has written her off as a lunatic. While Swagger declines her request to murder the sniper, he is impressed enough with her courage and investigative skills that he offers to introduce her to a Mossad operative, where her information is likely to be of interest. Mossad is definitely interested in meeting the sniper, since they have a few scores to settle with him, as Swagger suspected, and the chase is on.

As it turns out, there is little data about the sniper; he is careful to limit himself to any kind of exposure. No law enforcement agency has a photograph or his fingerprints. He is in perpetual movement from one country to another. A night raid on a rural house where the sniper is believed to be hiding results in fragments of information about the sniper’s next target, which appears to be an unnamed prominent public figure. This intel is the impetus for immediate action, creating much of the tension in the story.

This book reminds me of The Day of the Jackal by Frederick Forsyth. Fast-paced, tightly plotted, creative characterization. It was difficult to put down. A thumping good read. Starred reviews from Booklist and Publishers Weekly.