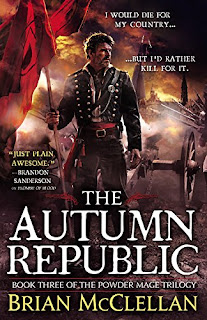 The Autumn Republic is the third and final book in the Powder Mage Trilogy by Brian McClellan. The book continues the multiple perspectives of the first two books in the series with the main characters being Inspector Admat, Field Marshal Tamas, and Taniel. Field Marshal Tamas finds the capital Adro has been conquered by a foreign army, his son is missing, and he has no idea who he can trust. Inspector Admat finds himself drawn into another investigation to figure out who the traitors are in Adran Army in exchange for finding his kidnapped son taken by the Kez. Taniel finds himself behind enemy lines while being hunted by the Adran Army who has declared him a traitor while only he and his girlfriend know the identity of the real traitor.

If you liked the first two books you will enjoy this final book in the series. The third book ends the series with plenty of action, humor, magic, and mystery. My only complaint is the book reads to me as if it was really supposed to be a book three and a book four and the two books were forced together into one read. But, that is a minor complaint since the book was so good. This book ends the series while also setting up The Gods of Blood and Powder Series with book one being titled Sins of Empire.