Review: Less Than a Moment: A Posadas County Mystery by Steven F. Havill 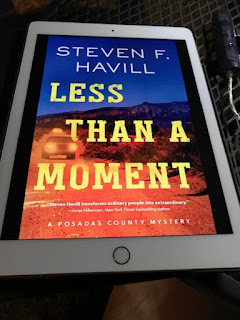 Less Than a Moment: A Posadas County Mystery by Steven F. Havill is the latest installment in a series that began long ago with Heartshot. This is a series where characters age, relationships evolve over time, and always present is the stark beauty of Posadas County, New Mexico. That aspect, a distinct and deep appreciation of setting, is always raised to a level that is its own constant presence in the series. The setting is a character in its own right. Sometimes the desert country is front and center in the tales and other times it is more of a backdrop to the mystery and the crimes that are happening.

In this case, the desert country is very much in the forefront of the read as is the legendary “NightZone” development. Designed to bring tourists as well as scientists to an astronomy based scientific installation in the New Mexico desert, it is home to various telescopes aimed at the wonders of the heavens above. There are frequent detailed references to the events in Come Dark: The Posadas County Mysteries published in 2016. Readers are encouraged to, at the very least, read that book before embarking on this read.

Undersheriff Estelle Reyes-Guzman has a lot going on this Friday morning in late May. That includes a meeting out at Night Zone with Miles Waddell, owner and financial backer of NightZone. That meeting will also include Frank Dayan, publisher of the local paper, and Kyle Thompson. Kyle Thompson, through a development company, has purchased a massive amount of acreage that abuts the NightZone project and rumors are swirling as to what will be built on the property. Thompson is not a local and no one knows what his intentions are which is causing stress among the locals. That includes the many folks who now rely on the NightZone project for good jobs. 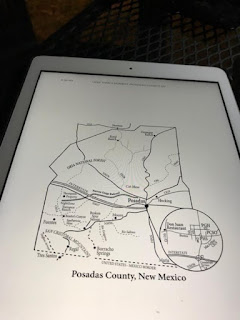 What will be built is very important to Waddell as he has spent millions and millions of dollars on the project. His entire development is designed to avoid all outdoor lighting of any type on the mesa it sits on or on the surrounding land. Everything has been meticulously designed to preserve the dark night skies. If the rumors of a planned housing development are true, this would be devastating to NightZone which is now fully embraced by all in the area.

That meeting is the launching pad for the main mystery of the book that soon features a murder, several suspects, and a complicated case with several interesting angles. While family certainly takes a role in the primary storyline, family is a far more major player in the two secondary storylines. One of which is the fact the kids are back in town and Undersheriff Estelle Reyes-Guzman is again having a hard time finding time to spend with them as various local events and the schedule of the kids work against her. One does not want to be an obtrusive grandmother, but one does not want to miss out on everything either and crime stops for no one.

The second of the two secondary storylines involves the no nonsense Sheriff, Robert Torrez, and his nephew, Quentin Torrez. As anyone who has read the latest edition of the local newspaper, Posadas Register, already knows, the young Quentin Torrez was arrested in recent hours for his third DUI. If that was not bad enough, he soon finds himself the target of an angry Sheriff who also suspects he might have been the culprit behind some vandalism. Then a murder happens and soon he is one of several potential suspects as law enforcement works hard to identify and apprehend a killer.

Big time thanks go to Lesa Holstine who mentioned late last week this book was out. Big time thanks go to my son, Scott, who able to figure out what to do to get the eBook through our closed Dallas Public Library System and make it all work so that I could happily read the tale on my iPad and escape reality for a few hours.