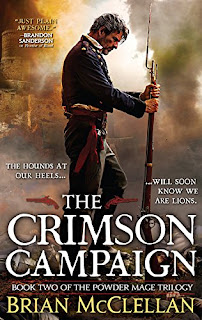 The Crimson Campaign: Powder Mage Trilogy Book Two by Brian McClellan continues the epic series. As noted in the jacket copy of the book, it was presumed that the Mad God Kresimir was dead because he was shot through the eye with a musket ball. However, he is not dead. He seeks revenge on the person who shot him. That was Taniel who, as a result of their brutal battle, has been living in a drug induced haze due to his injuries and mental health issues. Kresimir does not know who did it, but he wants that person dead as well as to seek vengeance on everyone in Adro for trying to kill him.

Taniel, who believes Kresimir is dead, is forced to return back to the front lines with his companion Ka-Pole (his quasi-girlfriend who is a witch from another country) after Tamas’ (Taniel’s Father) invasion of Kez fails leaving Adro vulnerable to a counter attack by the Kez Army. Tamas and his men are cut off behind enemy lines with dwindling supplies and enemy forces closing in on them. They must evade capture and work their way back to the front line and their own people.  Meanwhile, Taniel must not only work against the Kez, but deal with the problem of the surviving Generals of the Adro Army who seem determined to lose the war for whatever reason.

The third main story line is the continued investigations by Inspector Admant. His children and wife remain in the clutches of the Evil Lord Vetas. They were taken as part of an elaborate blackmail scheme and Admant is still trying to find them and rescue them as well as identify all involved.

There are a lot of aspects I like about this series. One prominent aspect I like is how both the good guys and the bad guys have well thought out reasons for doing what they are doing. Both sides have believable characters who engage in intelligent plans and make reasonable decisions. These characters are complex and utterly believable.

I like a plot point that might annoy some readers which I would describe as “the fog of war.” Several characters do not know things because of the war going on and the limited technology of the time means they only have access to out of date information. Tamas assumes his son for all intents and purposes is dead since, as far as Tamas knows, his son is still in a coma after his fight with Kresimir. At the same time, Taniel assumes Tamas is dead after his army is presumed killed after being cut off during the failed invasion.

Both father and son have to work through their estranged relationship while dealing with the grief of their assumed loss. I could see how some readers would be annoyed by this plot point since neither is actually dead.  I also liked one minor subplot of Tamas is still hurting after breaking his leg last book. Most of the time in fantasy series and even more so in television or movies, the injury a character sustains has zero impact on them long term. In this case, the leg injury he suffered is still very realistically causing issues.

This sequel to Promise of Blood is just as good as the first book. The Crimson Campaign continues the mix of action, drama, mystery and magic that was done so well in the first book. I very much enjoyed the sequel. There is a lot of character development, death, and interesting developments as this book builds people and events to the final book in the series,  The Autumn Republic.


Because the library did carry a print copy, I used Libby through the Dallas Public Library System to borrow the eBook edition.