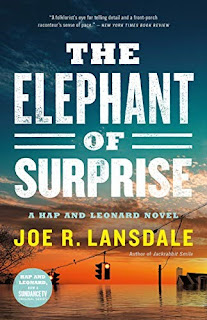 Joe R. Lansdale is a prolific and diverse writer, publishing nearly 50 novels and stories in a range of genres including mystery, suspense, horror, science fiction, Western, and comics. His stories have won an Edgar Award, a Raymond Chandler Lifetime Achievement Award, ten Bram Stoker Awards, a British Fantasy Award, a World Horror Convention Grand Master Award, a Sugarprize, a Grinzane Cavour Prize for Literature, and a Spur Award. His series about Hap Collins and Leonard Pine, unconventional PIs in eastern Texas, was adapted for television on the SundanceTV channel and ran for three seasons.

Hap and Leonard’s latest adventure The Elephant of Surprise (Mulholland Books, 2019) is a rock ‘em-sock ‘em sequence of skirmishes between our heroes and a group of racketeers intent on ridding the world of these two PIs who have stumbled into the mobsters’ path. Hap and Leonard are driving home in a pounding rain storm after a long stake-out, when Leonard glimpses the figure of a woman staggering across the road. They take her, drenched to the bone, into the car and learn she’s seriously wounded. They head to the nearest hospital, only to be confronted on the road by an oversized thug who wants the victim they’ve rescued and doesn’t mind killing Hap and Leonard to get her. From that point forward, between the hoodlums and the rain, wind, and tornadoes, the momentum seems unrelenting. For authors wanting to learn how to write shootout or fight scenes, this book is a great primer.

I enjoyed this story, more of a thriller than a mystery, a lot. What little mystery there is to begin with is soon sorted out when the mobsters’ original victim, the woman on the road, is well enough to talk. The rest of the suspense lies in watching to see how the bad guys will be brought to justice, and how Hap and Leonard will manage to save their skins. While it doesn’t hurt to have read earlier books in the series, enough backstory is provided along the way to make previous acquaintance with the characters unnecessary. Crackling action, snappy dialogue. Recommended.