For this Friday in August, I am running Barry Ergang’s 2015 review of Tailing Raymond Chandler by Brian  Thomas Olson. After you read the review, make sure you head over to Patti Abbott’s blog and see what she recommends as well as Happiness Is A Warm Book where Aubrey Nye Hamilton has her own selection. Have a good weekend! 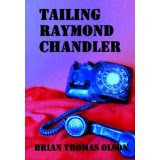 Los Angeles private detective John Lash is hired by Violet Merill to recover a screenplay that is missing from the major motion picture studio Ultramount, a screenplay that may have been pilfered by an employee who was working on it when it disappeared. The employee? Raymond Chandler.

Lash recognizes the name, says he’s aware Chandler has written two books, and that he’s read some of the author’s stories in Black Hand Mystery Magazine. (Why Brian Thomas Olson didn’t use the actual name, Black Mask, is beyond me.) Violet Merill points out that Chandler’s a heavy drinker, “is in some financial difficulty,” and that he at one time had an affair with an Ultramount secretary.

Lash isn’t on the case long before he realizes Violet Merill isn’t who and what she claims to be, or before another woman named Violet is murdered. When a second murder occurs, the victim being a former cop turned private detective who was heavily involved in a probe of corruption in the city government, Lash is the prime suspect. Lash must also contend with Josiah Curmon, an easily-manipulated city commissioner, and the powerful local gangster, Delvin Beasley, while dodging the police, trying to determine what’s so important about the missing screenplay, nailing the real killer, and saving the lives of Raymond Chandler and his wife Cissy.

How do I criticize thee? Oh, let me count the ways! Reluctantly, I should add, because I dislike writing negative reviews. Unfortunately, Tailing Raymond Chandler, despite being decently written, for the most part, and offering an intriguing story even if it does contain its share of clichéd private eye story tropes, teems with problems.

The book, as far as I can tell, is only available in a Kindle edition. The first problem concerns the formatting. The sample on Amazon’s website contains slightly indented paragraphs. They do not appear as such on my Kindle; there’s no indentation at all. I have no explanation as to why this is.

The other problems include punctuation, capitalization, and usage errors; misspellings; and clumsy, sometimes ungrammatical sentences. It’s no big spoiler to reveal that Violet Merill’s real name is Joey Wareng—the reader learns that fairly early. But long before that revelation, there are a couple of passages calling her Joey Merill when Violet is the intended name. These and some other mistakes suggest that the author failed to catch and correct them during the process of revising his final draft. He really needs a good proofreader.

He also needs to do his homework if he’s going to write about some real people from an older era because the novel’s biggest problems are anachronistic. A squib on the book’s Amazon page says the time of the story is 1939 when it’s actually 1938. I know this because the novel mentions that actress Thelma Todd died three years earlier. She died in 1935. What bearing does this have on the story? When Violet Merill first mentions Raymond Chandler to John Lash, Lash says that Chandler has written two books. The fact is, Chandler’s first two novels, The Big Sleep and Farewell, My Lovely, were published in 1939 and 1940, respectively. Moreover, he went to work for Paramount Pictures as a screenwriter in 1943. In 1938, he was only writing for the pulps.

There’s also a very oblique reference to the James Cagney film White Heat, which didn’t come out until 1949. A film studio called American International is mentioned. I suspect Brian Thomas Olson thought he was making up a fictitious name, but in fact there was an actual American International Pictures. It began in 1954.

The author describes Chandler as “in his late 40s, just under six feet in height, medium build, slightly balding, wearing round tortoise-shell eyeglasses and smoking a pipe.” I’ve never seen a photo of Chandler that indicates he was balding.

The author has Chandler say he was once in Naval Intelligence. I’ve never read anything that substantiates that claim. When World War I broke out—I’m quoting the curriculum vitae from Raymond Chandler Speaking, edited by Dorothy Gardiner and Katherine Sorley Walker (Houghton Mifflin, 1962)—Chandler “Enlisted with the Canadian Gordon Highlanders. Served in France with the First Division of the Canadian Expeditionary Force. In 1918 joined the Royal Flying Corps (R.A.F.). Demobilised [sic] in England in 1919.”

A brief biographical note at the book’s end says of Olson and his wife: “Both are avid Raymond Chandler fans.” That being the case, you’d think Mr. Olson would present his subject more accurately.