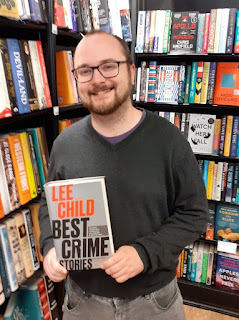 I make no secret of the fact that I’m obsessed with locked-room mysteries. I love to read them, I love to write them, and I love discovering books that offer new spins on the classic tropes and tricks of the subgenre. For those who aren't in the know, "locked-room mystery" is typically a sort of umbrella term for "impossible crime" fiction. That is, fair play puzzle mysteries in which the question is not only whodunit but also how.

John Dickson Carr was the most prolific and accomplished writer of locked-room mysteries, as many genre fans know, and some of his most famous titles include The Hollow Man and He Who Whispers. He churned out a string of masterpieces, and needless to say I devoured them all- as I do with pretty much every story I can find which tackles the locked-room or the impossible problem.

But with such a niche subgenre, you will inevitably encounter repetition of the same trick from time to time. Speaking as someone who has attempted to come up with locked-room problems for my own stories, I can tell you originality is a major challenge- that’s part of the fun. It makes me admire the work of Carr and Ellery Queen and Clayton Rawson all the more, as well as the other authors who are rightly celebrated for their creativity in a very demanding sphere of the crime writing world. So here are a few titles that don’t get enough acclaim, but are well worth rediscovering.

(A quick disclaimer: I don't claim that these are the best locked-room mysteries, though they ARE very good. Simply that they’re underrated, and that they retain the potential to surprise even the most well-versed reader of puzzle mysteries. As such, they’re well worth seeking out.)

The work of Australian author Max Afford is often overlooked in studies of golden age mystery (which is a mystery in itself). Just about everything he wrote- with a couple of notable exceptions- was an impossible crime. His series sleuth, Jeffery Blackburn, appears in a string of complex and atmospheric novels. But I’ve picked Blood on his Hands as it may be the most gruesome and macabre of the bunch; a perfect showcase for Afford’s creativity and his very dark sense of humor.

Barbara D’Amato’s Hard Tack is a seafaring mystery featuring series detective Cat Marsala. In the vein of Agatha Christie’s Death on the Nile, it places the sleuth on a ship whose passengers are positively seething with hidden resentment beneath a veneer of society savoir faire. Naturally, it’s only a matter of time before a murder takes place- this time in a locked cabin. The solution here is surprising, gruesome and fiendishly practical. What more could you want?

Bruce Elliott is an anomaly in the world of mystery fiction. As far as I know, You'll Die Laughing is his only published novel. It's a sort of madcap caper in which a group of strangers are gathered at the mansion of a sadistic recluse for reasons unknown. A classic set-up, but the solution to the apparently impossible locked-room murder is completely original. This is a short and briskly-paced book that is punchily written and dexterously plotted. Elliott also just happened to be a professional stage magician, which no doubt explains his knack for literary sleights-of-hand.

I’m a huge fan of Helen McCloy's "Basil Willing" series, and like many critics I would rank her novel Through A Glass Darkly up there with the very best of Carr, Christie and Queen. While that book is her masterpiece, it’s by no means her only contribution to the realm of impossible crime. Mr. Splitfoot was written long after the end of the so-called golden age of mystery fiction in which locked-room mysteries thrived. But at the same time it is crammed with so many of the features that made the golden age great. This time, Basil is faced with a fascinating conundrum involving an apparently cursed room, where those who spend the night are seldom seen alive in the morning.

More Dead Than Alive is another magic-themed mystery, this time by a very prolific author of traditional puzzle mysteries. Roger Ormerod managed to carve out a lengthy career long after the golden age was over. He had a knack for twisting the conventions of the genre, and More Dead Than Alive makes the most of its gothic setting in an English castle where a stage illusionist has been unceremoniously hurled from a window in the locked room at the top of a tower. The solution to this one is completely fair play, but I bet you won't see it coming...

So there you have it: five more mysteries for your teetering TBR piles. Hopefully you’ll find something here to puzzle, beguile and confound you- as all good mysteries should.

Tom Mead is a UK-based crime writer specializing in locked-room mysteries. He has written short fiction for Ellery Queen Mystery Magazine, Alfred Hitchcock Mystery Magazine and numerous others. Recently, his story “Heatwave” was included in The Best Mystery Stories of the Year 2021 (edited by Lee Child). His novel Death and the Conjuror is forthcoming from the Mysterious Press in July 2022. You can find Tom at his website or on Facebook.

I've read a lot of locked rooms but never heard of those, I'll have to check 'em out.

Great list! I am probably the only person ever who didn't like McCloy's Through a Glass Darkly -- I recognized the plot device right away. But will give one of other books a try soon.

I haven't read these ones yet — thanks for the list!