FFB: "No Chance In Hell" by Nick Quarry---Reviewed by Barry Ergang

Barry Ergang is back today with his review of No Chance In Hell by Nick Quarry.
NO CHANCE IN HELL (1960) by Nick Quarry
Reviewed by Barry Ergang
Marvin H. Albert wrote a variety of novels under a variety of pseudonyms, among them Albert Conroy, J.D. Christilian, Ian MacAlister, and Anthony Rome. (The Rome titles included two that served as the basis for two films starring Frank Sinatra: "Tony Rome" and "Lady in Cement.") He also wrote a number of books as Nick Quarry, six of which starred New York private detective Jake Barrow. 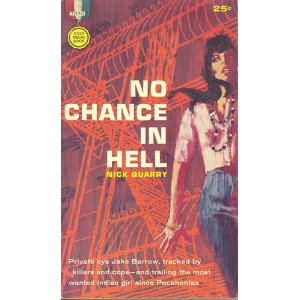 No Chance in Hell is fast-paced tale of chaos stretching from New York City to Santa Fe. Showing off his expensive new apartment to his girlfriend Sandy, herself an undercover cop, Barrow discovers that a sixteen-year-old girl named Nina Cloud has climbed in through a rear window. Her father Johnny Cloud, an old wartime friend of Barrow's, has told her to seek out the detective for protection after a woman she was staying with is murdered.
Barrow, worried that Johnny Cloud's phone may be tapped, doesn't want to call his New Mexico ranch from the apartment for fear his—Barrow's—own number might prove traceable, so he leaves Nina in Sandy's care and goes out to make the call. He learns that Cloud, who occasionally drives big rigs for an Albuquerque trucking company to supplement his income, left for New York several days earlier. Returning to the apartment, he finds that Sandy has been shot and that Nina is gone.
Barrow also knows that a vicious killer named Ben Hanks—probably the same man who shot Sandy—is after her, and he wants to get to Hanks before he can harm Nina. As his investigation expands, he learns that Harvey Kew, who has his hand in a number of rackets but who has so far evaded prosecution, is mixed up in whatever Johnny Cloud has gotten himself into—because it gradually becomes clearer that Cloud is involved somehow. As it turns out, he's in a New York hospital recovering from gunshot wounds, but he won't tell Barrow or the police what's going on until he's assured Nina is safe. Whoever is after him intends to use Nina to prevent him from talking.
As his investigation progresses, Barrow is framed by Ben Hanks for the savage murder of a teenaged boy who was sheltering Nina, and now must manage to escape from cops and evade killers while he searches for the girl. He wants to save her life, of course, but he also realizes she's the only person who can clear him of a murder charge. Aided by Johnny Cloud's beautiful sister, who goes by the appropriate nickname Stormy, he must make his way across the country to New Mexico to save Nina and force a showdown with Hanks.
How I can adequately describe No Chance in Hell without resorting to clichés like "action-packed" and "hardboiled"? It's simple. I can't. It is. Should I tell you it moves like a runaway train? Well, yeah, provided you understand it's the Bullet Train. And I guess I should mention that there are a couple of high-tension chapters in which Barrow, trying to get away from the police after he's been framed, must make his way almost blindly through a network of underground sewer pipes—a section that vaguely reminded me of a couple of chapters in Ian Fleming's Dr. No, which predated No Chance in Hell by two years. I suppose I should point out as a forewarning to squeamish readers that Albert/Quarry, like many another author of paperback originals from this era, liked to dwell on the physical attributes of female characters in some detail, as well as write descriptions of sexual encounters that were overheated and overwrought to the point of being unintentionally comical—to wit: "There was a roaring and pounding of blood in my ears, a hot liquid urgency coursing all through me...I pulled her closer in a rising madness and she was all coiled, supple strength sheathed in springy softness—by turns provoking, refusing, demanding, retracting, assaulting...And then her teeth were sinking into my shoulder, stifling her gasping cries of pain and delight, and a furious whirlwind of savage sensation swept me and I was attacking her slim agile wickedness in a mounting, driving frenzy...."
Oy!
Although it seems at first to be a straightforward thriller whose protagonist happens to be a private eye, No Chance in Hell also turns out to be a genuine detective story, with Barrow at the end resolving the mystery of who wounded and later killed Harvey Kew. His explanation of what happened and how he deduced it runs a tad longer than necessary, but nevertheless shows that Barrow is a detective who can use his brain as well as his fists and gun.
For additional information about Marvin H. Albert, see http://www.thrillingdetective.com/eyes/barrow.html and #http://www.mysteryfile.com/GM_Albert/goldmedal_albert.html 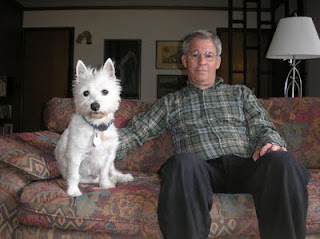 Barry Ergang © 2011
Winner of the Short Mystery Fiction Society’s Derringer Award for the best flash fiction story of 2006, Barry Ergang’s written work has appeared in numerous publications, print and electronic. No Chance in Hell is one of the many books Barry has for sale—see http://jdcarr.com/forum/showthread.php?t=6771
Posted by Kevin R. Tipple at 7:52 AM

Though the plot sounds to contain many standard elements (perhaps even cliches) the writing sounds interesting. I may have to try this one.

All of the Nick Quarry titles I've read (and which I have for sale) are good, fast-paced entertainments. Nothing new and ground-breaking, just rip-roaring reads.

I'm a big fan of Albert's work (and thanks for linking to that article). I're read and enjoyed all the "Nick Quarry" books, and I love that pen name, too.

Happy to provide the link, Bill. It's a good article. I think I've read all of the Jake Barrow titles, but not the others Albert wrote under the Quarry pseudonym. And I agree with you that Nick Quarry would have been an even better name for his hero than Jake Barrow is.

Thanks for the input, Barry. Sounds like another to add on my huge TBR pile!