It is Friday and that means it is time for another Friday’s Forgotten Books Review. (For the complete list, surf over to http://pattinase.blogspot.com/ Lots of  good reading there and not just on Fridays.)  Barry Ergang returns with Double In Trouble by Richard S. Prather & Stephen Marlowe.

Richard S. Prather's Shell Scott and Stephen Marlowe's Chester Drum were two of the most popular private detectives in Fawcett's Gold Medal line of paperback originals. The writers had an agent in common who suggested that his clients team up their sleuths, and so Double in Trouble was born. (For additional information, see the reminiscence by Stephen Marlowe at Ed Gorman's blog.) 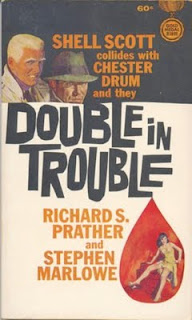 The story begins with Scott in Los Angeles, hired by Alexis Frost to find her missing father. Gideon Frost is scheduled to testify in Washington before the Senate committee chaired by Senator Blair Hartsell, a committee which has been investigating corruption in labor-management relations and which has recently targeted the very corrupt National Brotherhood of Truckers union. Shortly thereafter, one of Scott's best friends and a dues-paying member of the union is murdered.

Later that same day, in Washington, D.C., Drum thwarts the attempted kidnapping of a woman who won't tell him her name. The incident eventually thrusts him into the investigation of the National Brotherhood of Truckers, too—as a special operative for the Hartsell Committee.

Each detective, working his side of the country, learns that the other is involved. Each knows of the other by reputation. But as events unfold, each begins to suspect the other of being in league with the enemy. At the same time Scott's investigation takes him to Washington, Drum's takes him to L.A. Eventually, of course, they meet face to face—or collide, as the book's cover blurb accurately terms it—when their separate but intimately related cases converge for some surprise revelations and the (literal) sock finish.

I first read Double in Trouble when I was in my teens, which means more than forty years ago. I had read nearly all of the Shell Scott novels and short story collections that had by then been published (and continued to read them as new ones appeared), and quite a few of the Chester Drum novels (and have read quite a few more, purchased on e-Bay, in recent adulthood). Liking both in different ways, when I acquired a copy of Double in Trouble, I was filled with what Shell Scott describes in it as a "joyously anticipatory emotion." After I read it, I felt as Scott subsequently did: "My joyously anticipatory emotion was all shot to hell."

Rereading it after all these years, I have a better idea why. Marlowe was a better "pure" writer than Prather, with a stronger sense of character and place. Though his cases were vastly different, usually taking him out of the country, Chester Drum's style and manner were clearly influenced by Raymond Chandler's Philip Marlowe. (I've long wondered if Drum's creator, who was born Milton Lesser and who legally changed his name to Stephen Marlowe, did so specifically because of Chandler's influence.) At the opposite extreme, Prather was a master of comical circumstance and prose style. Shell Scott could be as hardboiled as Mike Hammer—but with a wacky sense of humor and a lighthearted lecherousness that would appeal to most male readers, regardless of how "liberated" they were. Scott's most entertaining cases put him in outlandish situations—see, for example, Strip for Murder and Dance With the Dead.

It's this clash of styles and approaches that weakens Double in Trouble, that militates against Prather more than Marlowe because the storyline doesn't permit the kind of zaniness the reader expects and wants from Prather.

Additionally, because the book alternates chapters told by each detective, it's hard to keep track of the details of the case, who's trying to do what to whom. In spite of this, it's readable and loaded with enough action to fill a year's worth of pulp magazines, so eventually you quit worrying about the details and just rocket along for the ride.

For more on this novel and others created during the Golden Age of Detection follow the link to http://gadetection.pbwiki.com/ where you can search by author and/or title.

I have always been a fan of the 'real' detective stories of yesteryear. Glad to see you reviewing this book. I hope it will inspire readers to dig this book and similar ones from the library shelves. Great job, as always.

Thanks, Joe, but it was NOT me. All the review work was done by the very good Barry Ergang.

I have this one the shelf, and have read quite a few Shell Scott novels and stories and a few Drum, so I've been looking forward to reading it. Now I'm a little put off, but your conclusion gives me hope. I guess I thought the tow of them would be working together on the case...

Eventually, Richard, the two of them do get together on the case. And don't be put off. It may not have been the book I hoped it would be, but you might love it. As I indicated, disappointed as I was by some aspects, I still had fun re-reading it.

I first read Double in Trouble when I was in my teens, which means more than forty years ago (hmmm, that’s sounds strangely familiar) and I liked it a lot. I think I had read at least one book by each author prior to that. Always preferred Peter Chambers to Shell Scott, although in recent years I’ve reread a couple of Prather’s novels and have more of an appreciation for him now. Marlowe may have been out of the Chandler mode but I always thought Drum was boring. Double in Trouble was the perfect mix: Drum needed Scott to liven him up and Scott needed Drum to tone him down. I reread it a few years later and I wish I had a copy around here so I could reread it today.

I thought some of the Peter Chambers mysteries were okay, but I was never hooked on them as I was the Shell Scotts. I thought Chambers' narrative style could be obnoxious at times--e.g., referring to himself as a "private richard." Puh-leeze!

Once you described the writing styles of the two authors, Barry, it's easy to see how there would be the unevenness in the story you also described. I haven't read the book, but I'm guessing when the two protags finally got together, their differences made the story more interesting. Excellent review, as always.

Another book to add to the list!
There's no end to them.

Well, if we do become homeless at the end of the month (a very crushingly real concern) I will be turning this blog over to Barry and who knows what will happen then.

But, in the meantime, I want to thank everyone for reading my work over the years and Barry's.