While third in the series featuring Hannibal Jones, the events depicted in The Troubleshooter predate the novels Blood And Bone and Collateral Damage. As such, it serves as a perfect introduction to the series for new readers and for those fans familiar with the series, explains how it all began.
Displaced by a fire in his apartment complex, Hannibal needs a new home, at least temporarily. With his new struggling business open less than six months and all records destroyed in the fire along with everything else he owns, Hannibal is devastated and contemplating a bleak future. Thanks to Cindy Santiago, daughter of his friend, Ray Santiago, he may get a new place fast. 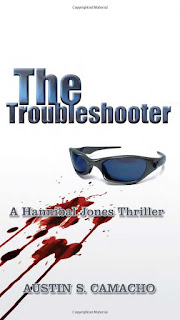 Cindy works in a small law firm and one of the partners, Mr. Dan Baylor, has recently branched out into real estate as a developer. Cindy is sure that she can set up a meeting and Mr. Baylor will help Hannibal get a new place. They do meet and after Baylor checks with his staff, he informs Hannibal that nothing is currently available. The only possible exception and one that he is very reluctant to reveal, is in a building across the river in Anacostia. Infested with squatters and drug dealers, Mr. Baylor has been unable to get them out of his building despite repeated requests to the Police. The property, which he bought from the government and is intended to be developed for low-income housing, is costing Baylor serious money every month and thanks to the squatters and drug dealers, he can't recoup his investment.

A deal is struck for Hannibal to clean out the building and provide security so that repair crews can go to work. Former government agent and now "troubleshooter" Hannibal Jones figures he has the bases covered and can have the building emptied permanently in less than a week. But, he is very wrong and quickly puts himself and those he cares about in great danger as the war for control between a neighborhood and the mob heats up.

Unlike the earlier two novels of the series, this novel is more of a character study and less a mystery. Little detective work is actually done since the dealers and other bad guys are quickly identified. As such, this novel shifts more into a vigilante style of justice work with Hannibal forced to repeatedly do battle at considerable cost to clear the building. Over the course of the siege, not only do we see how Hannibal came into being through insights into his character but we also see the beginnings of the romance between himself and Cindy Santiago. Several other recurring characters from the other novels make their introduction as well, explaining the tight bonds that exist.

Like the others in this series, this very enjoyable novel features tight writing, plenty of action, and intriguing characters. However, in so doing, some reviewers have mistakenly compared this author with Tom Clancy. Please do not be misled as this book and the others in the series have nothing in common with Tom Clancy novels. Both authors are writing books that do not share connections of style, character development, plotting, pacing, or anything else in common other than the fact they both release books printed on paper. Since Tom Clancy writes detailed techno thrillers making such comparisons meaningless and absurd, a better comparison might be made between Hannibal Jones to the "Lucas Davenport" character in the early books of the Prey series by John Sandford if comparisons must be made. Much like Lucas, Hannibal is an intense loner by his very nature and is very selective in his personal entanglements, romantic or otherwise. Much like Lucas, Hannibal does not tolerate evil in its many forms and is often conflicted as to the results and consequences regarding such confrontations. Much like Lucas, Hannibal is often pitted against forces that devalue human life at great personal cost.

Hannibal is fast becoming an old friend that this reader regularly looks forward to every time a new novel is released. This author and his three mystery novels to date are well worth the read and worthy of a place on your bookshelf.

This sounds very good, and the author was completely off my radar. Thanks for the review!!

Thank you for reading!