Time for Friday's Forgotten Books, hosted by Patti Abbott, and Barry returns with his review of Strip For Murder by Richard S. Prather. For more titles and lots of other good stuff, surf over to Patti's blog.

My father was an avid reader, sometimes known to knock off a couple of books in an evening, and a big fan of mystery and suspense stories. An avid reader myself, and a mystery fan ever since my mother bought me the first two Hardy Boys titles when I was around eight years old, by the time I was twelve I was devouring mystery novels and short stories by the likes of Agatha Christie, Erle Stanley Gardner, Rex Stout, Raymond Chandler, Ross Macdonald, and Mickey Spillane, among others. I often looked at my father's night table to see what he was reading or had finished, and it was through him that I was eventually introduced to Stephen Marlowe, Donald Hamilton, Ian Fleming, Nick Quarry, Neil MacNeil and Michael Avallone—among others. (If I had kept all of the paperback mystery, suspense and noir originals he bought that were published by Fawcett, Signet, Lion, Ace and other companies, I'd be sitting on a fortune in collectibles today.) 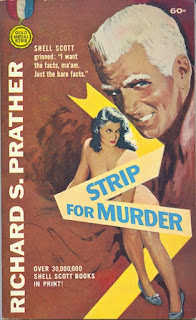 Another author my father introduced me to, who became a favorite, whose books I still own and cherish was someone many would consider a hack but who, in his own small way, was an artist. If you consider artistry to include solid storytelling ability and a flair for comedy, that is—and I do. I'm talking about Richard S. Prather and his series of novels and short story collections starring that perpetual thirty-year-old, the inimitable Shell Scott, private eye. And that brings us to the title under consideration here, Strip for Murder—one of the greatest in the series.

Scott is hired by the very wealthy Mrs. Redstone to investigate the background of a man named Andon Poupelle, who recently married her older daughter Vera and whom she suspects of being a suavely-veneered lowlife whose chief interest in Vera is motivated by avarice. Mrs. Redstone tells Scott she had originally hired a private detective named Paul Yates for the same purpose. Yates’s report on Poupelle was complimentary, but Mrs. Redstone has her doubts. She shows Scott a newspaper clipping, the story reporting that Yates was shot to death that morning on a road north of Los Angeles. Besides having him check on Poupelle, she wants him to determine whether Yates was killed because of what he did on her behalf.

Scott barely begins his investigation when he receives a call from Mrs. Redstone’s other daughter Laurel, asking him to meet her at a place in the country called Fairview. Someone, she insists, is trying to kill her. He, however, must pose as Don Scott, the new health director. Thoroughly confused, he sets out to meet her. On the way, he passes the road on which Paul Yates’s body was found. When he arrives at Fairview, he sees only a locked gate with a cowbell hanging from a rope nearby. He rings the bell and, a moment later, gets one of the great—but pleasant—shocks of his life.

I can’t recall if Scott described himself this way in one of the books or whether the publisher came up with the phrase for a cover blurb. Whichever the case, Scott is somewhere described as a “happy-go-lookie” private eye. After he rings the bell he hears the sound of someone running, and couldn‘t be happier or lookier:

“Then, with startling, almost overwhelming suddenness, a naked tomato swished out from the tree and loped around that curve in the path, straight toward me. Yeah, naked, stark staring nude.

“Well, you should have heard me. I let out one hell of a noise.”

The attractive young woman’s name is Peggy. After a brief conversation with Scott, who finally realizes Fairview is a nudist colony, she summons an equally attractive, equally naked Laurel Redstone. Once she determines that he can focus on matters of urgency more than on flesh, Laurel tells Scott about the two attempts on her life, one of which resulted in a serious injury to Fairview’s health director. A nationwide nudist convention is scheduled for a few days hence, so Scott must undertake the role of the new health director while trying to protect her and while fulfilling his obligations to her mother.

The novel moves at a rapid pace as Scott tangles with a variety of hoods, among them a dangerous young bald Chinese with the moniker Young Egg Foo, narrowly avoids being killed, tries to protect Laurel, and struggles to solve several murders—including that of Mrs. Redstone. Along the way he meets the sophisticated but dangerous Ed Norman, who owns a nightclub called Castle Norman, which is several miles from Fairview. The place is literally an Arthurian castle, complete with drawbridge and moat and hoods decked out in armor and bearing lances. There’s a kind of edgy civility to Scott’s first meeting with Norman that concludes with Norman advising him not to return.

Richard S. Prather had a fondness for the wacky major action scene when the storyline lent itself to one. Strip for Murder’s storyline not only lends itself, it gives the reader two such scenes. Earlier I alluded to Prather’s comic skills. Slapstick is easy enough to portray on the screen—remember the Three Stooges—but extremely difficult to convey in print. Few writers can pull it off. Prather was a master of written slapstick.

Shell Scott needs to get back into Castle Norman. There’s only one way to do so: as a knight in armor, complete with horse and lance. (Might this be an oblique allusion to the romantic concept [a la Raymond Chandler] of the private detective as a modern knight errant?) Of course, once he’s in he has to get back out, which isn’t easy after he’s been identified.

And then there’s the chapter readers will remember above all others, not only in this novel but in other Scott adventures. (I first read the book more than forty years ago and have never forgotten this section. In fact, in my junior year of high school, I read the section in a  public speaking class as part of an assignment, to the merriment of my classmates.) It’s the day of the nudist convention and Scott resumes his imposture as the health director when a squad of hoods invade and start shooting at him. He can’t shoot back; he’s unclothed and unarmed. He has only one choice: flee. I won’t mention how he effects an escape lest I ruin the surprise and dilute the laughter. Suffice it to say that readers who don’t laugh or, at the very least, grin through this chapter shouldn’t be reading comic novels.

Strip for Murder is unabashedly sexist—keep in mind when it was written and that its audience was primarily male—so readers for whom modern “political correctness” is a shibboleth will probably be turned off. Yes, there are a couple of descriptions of unclad females, but I hasten to add they‘re tame by modern standards and not necessarily different from that which you can find in a lot of mainstream fiction. Yes, there’s a scene in which Scott makes love to Laurel, but it is not at all graphic. Prather kept couplings discreet.

Strip for Murder is, first and foremost, a galloping hardboiled detective story leavened with humor, not a leering, slobbery excuse for sexual shenanigans every few pages. If you’re not easily offended, you’ll have a great time reading a classic of its kind.

This is my all-time favorite Shell Scott novel and one of my favorite novels, period. I've never laughed harder in my life.

You had me at "The Three Stooges."

It's my favorite book in the Shell Scott series, too. But if you think it's not possible to laugh harder, get hold of Lamb: The Gospel According to Biff, Christ's Childhood Pal by Christopher Moore. It's the single funniest book I've ever read, the kind where every few pages you have to resist the temptation to call a friend and say, "You've got to hear this" and then read him/her a particular passage.

A very good Shell Scott, though not my favorite. Then again, I've only read about half of them. The cover on that current printing is absolutely horrid, making Scott look like a character from the original Star Trek.

The new covers are generics used on all the reissues from an outfit called E-Reads. I saw one up close the other day, a copy of Bodies in Bedlam. The reissues are trade paperbacks with a cover price of $14.95, a price that's apt to dissuade a lot of potential buyers. Of course, they can find many of the Fawcett, Pocket Books and Tor Books originals at abe.books.com, biblio.com, and eBay, sometimes for less, sometimes for much more....