It is May 1960 in Fort Worth, Texas as this fifth book in the series begins. It is a calm quiet morning as Baby Shark, Kristin Van Dijk, brings around the old car she and her private investigator partner, Otis Millett, are going to use for a stakeout later in the day. Everything is peaceful until the shooting starts. 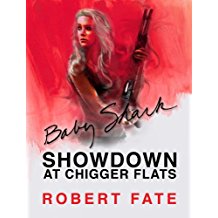 When the shooting stops Baby Shark is wounded, cars are smashed and destroyed in the street with the wreckage everywhere, and bad dead guys litter the area. Fort Worth police respond in force and before long Baby Shark is getting treated and all involved know who is responsible. The manhunt is on and Otis and Baby Shark take precautions as they expect another ambush attempt.

That is not to say everything is under control. Far from it. In a violence filled tale that runs from Fort Worth to Chigger Flats in far West Texas near Fort Stockton, Baby Shark and some friends picked up along the way unleash a wave of violence on the bad guys equal to what was dealt to them. Fast paced and intense, this novel released by the author is vintage vengeance all the way through.

While the almost twenty-five year old Baby Shark occasionally pauses a moment or two to consider her past (fully covered in preceding books) as well as her future, the primary focus is on the current threat and ending those involved who would hurt her and Otis. To do that she spares no prisoners and gives better than she gets in this violence filled adrenalin ride for justice. Over five books Baby Shark has proven again and again you can’t rationalize with evil--you have to treat it for what it is and kill it.

Currently Baby Shark’s Showdown at Chigger Flats is only available as an e-book. If you have not read this series, I strongly suggest that you begin at the beginning with Baby Shark and work your way forward.

Material supplied by the author prior to publication.

I've loved Baby Shark from the very beginning and look forward to reading the latest instalment.

Good stuff, Earl. This might be the most violent one yet....and that is saying something. :)))

The violence hasn't bothered me a bit in this series. Like Earl, I've loved Baby Shark from the beginning. Terrific book. My review will be up tomorrow, so I wanted to read what you thought of it. Love that Baby Shark.

This is my favorite new series. I stumbled across it about a month ago and read the first four books in a week. I can't wait to read this one.