Friday means Friday’s Forgotten Books hosted here by Patti Abbott. This week I thought I would do something a little bit different than normal. Clearly, Cover Of Snow, published last year is not really a forgotten book. This debut novel by Jenny Milchman was one of my five favorite books of last year. It is now up for the Mary Higgins Clark Award from the Mystery Writers of America. If you have not read it you really should. Especially since the next book from this talented author is coming in the spring… 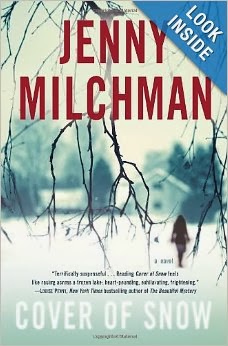 Everything changed for Nora Hamilton that January morning when she woke up alone. Brendan, her police officer husband, was not in the bed with her. The normal morning sounds he would have made were not present. No sounds of the shower, no smell of morning coffee, no nothing as the strange silence stretched on and on. She will soon discover the silence exists for a good reason-- the man who made love to her the night before has committed suicide.

Devastated and distraught, Nora just wants to know why he did it. The “why” of it threatens to destroy her and makes her question everything. What drove him to this act--so out of character with no warning at all--and left her alone in the frozen small town of Wedeskyull in upstate New York. A frozen old place---literally and metaphorically--- she moved to for Brendan and where she is very much an outsider. An outsider not to be trusted and who does not understand her place in the community as well as the fact that things are the way they are because they have always been that way and will always be that way. Nora’s quest to get answers to why Brendan killed himself will take time and come at great cost to nearly everyone.

Cover of Snow is the debut novel of Jenny Milchman. Like any good mystery, nothing is what it seems and everyone has secrets to hide. Deceit is an art form long practiced by all and such is the case here. Nora is surrounded by smiling and friendly enemies who expect her to go back where she belongs in the wake of her husband’s death. Her unwillingness to just quietly go away sets the stage for a steady increasing level of suspense as the reader turns the pages.

This is a powerfully good book where the setting is just as alive as the other characters.  What legendary author James Lee Burke has done for Louisiana, author Jenny Milchman has done for upper New York in winter. The cold frozen landscape is always present lurking, waiting to kill throughout the suspenseful read. A living breathing force that is present on every single page where the characters are inside and warm for the moment or outside in the elements.

Much is at work here in this complicated read. This review does not give the book justice. You simply have to read it.

Kevin, I can never read this review without getting goosebumps of the sort Nora might've had. Thank you for honoring Cover of Snow, more than a year ago, and now. Your taste in books has led me, and I am proud to be a part of it now.

That was me commenting, not the mysterious guy back there in the corner :)

lol....thank you. An amazing compliment.

Wow! What a great review! I was immediately sucked in to the story line. I have been blog hopping around trying to find a good book to read... I just finished a great thriller, "Chasing A Miracle" book one in a trilogy, by Eliot Hartford Bailey. It was a great read and had little bit of everything that I love – Action, adventure, conspiracy, religion, drama, love, government, travel, sci-fi http://eliothbailey.com/. Now its over and I am desperately looking for something new to read. Looks like I found my book! Thank you so much for the recommendation. I am heading to the library tonight to see if I can track it down!

Cover of Snow sounds excellent - great review! I will check that out. Thank you, Ashley, for your share as well. Looks like a really good thriller as well.