FFB Review: "In The Best Families" by Rex Stout (Reviewed by Patrick Ohl)

Friday means Friday’s Forgotten Books with Patti Abbott. The list will be here later today. Patrick Ohl is back this week with a look at In The Best Families by Rex Stout…

The last time we checked in at Nero Wolfe’s brownstone in The Second Confession, the great man was directly confronted by Arnold Zeck, a criminal mastermind who is something like the Professor Moriarty to his Sherlock Holmes. Luckily for Wolfe, soon afterwards, an event occurred that placed Zeck squarely on Wolfe’s side. But Zeck has gone too far this time. 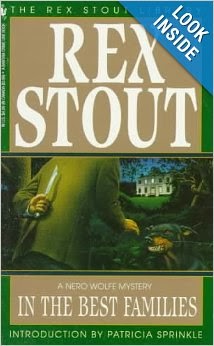 It happens when Sarah Rackham asks for Wolfe’s help. She is a wealthy woman, and has been happily married to Barry Rackham for four years. In that time, Barry has regularly asked for money, but lately his demands increased so dramatically that Sarah refused to give him anything the last time. After that, Barry no longer asked her for money, and yet his extravagant spending habits are unchanged. Where is all this money coming from?

No sooner does she leave, a package of sausage is delivered to Wolfe’s door. Except the sausage manages to metamorphose into tear gas, and Arnold Zeck is soon on the line, gloating to Wolfe that had the package contained a bomb, Wolfe would now be dead. He then formally demands that Wolfe not investigate the Rackham case.

But Wolfe is not one to be bullied and sends Archie along to the residence of Calvin Leeds, Mrs. Rackham’s cousin, ostensibly to investigate a dog poisoning. (In a delightful tip of the hat to the events of The Second Confession, Archie at first proposes that he go down to Mrs. Rackham’s country house for a weekend party, only to have the idea firmly rejected.) Before you know it, a murder occurs, and Archie is once again dealing with the same officials as in The Second Confession. But this time, when Archie returns to the brownstone, the door is wide open, and Nero Wolfe is nowhere to be found…

The conclusion of the Arnold Zeck trilogy is typical of trilogies. The first one introduces the concepts and the second one expands on them. In the third instalment, the story goes into maximum overdrive with the stakes higher than ever before. The only thing with trilogies is that most of them seem to misstep on the third outing, with a few notable exceptions. In that regard, In the Best Families is a satisfying conclusion for the Arnold Zeck trilogy, but in the interests of fairness, I have to admit it’s the weakest of the three books. 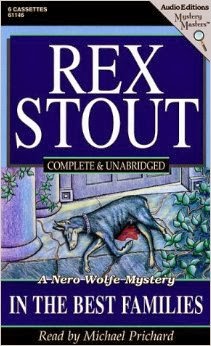 The problem for me is that Wolfe and Archie, so delightful together, spend most of the novel completely apart and only reunite near the end. We miss out on that classic Wolfe-Archie banter, and although Archie is terrific on his own, he’s always so much better when he’s nagging Wolfe. And really, the lengths Wolfe goes to in this novel are just… extreme, especially for him. I’m not entirely sure whether I liked this or not. I’m in danger of saying too much, so I’ll just shut up now.

The murder mystery that starts the ball rolling is a decent one, with a clue or two pointing you in the right direction, but long before the solution, the book abandons the central mystery and becomes more of a thriller. The mystery is resolved in the end, and its solution really is satisfactory, but it’s been left more-or-less alone for so long that it loses some of its impact.

I liked In the Best Families just fine, but compared to the two entries that precede it, it’s pretty underwhelming. But it stands up decently on its own merits as a Nero Wolfe story, and it really is fun to read about these characters. The stakes are high and Wolfe’s playing a very dangerous game. The book sags a bit in the middle when Wolfe goes missing, but when he reappears near the end, the book springs back to life for one whizz-banger of a finale! And for once, the mystery at the book’s core is pretty decent, especially by Rex Stout standards. Overall, this one is recommended, but only for those who’ve read the previous entries in the Zeck series.


Patrick Ohl ©2014
Patrick Ohl is a 20-year old Canadian crime fiction aficionado who enjoys hobbies such as taxidermy and runs a dilapidated motel in the middle of nowhere alongside his crazed mother. He enjoys relaxing in his subterranean evil lair while watching his favourite hockey team, the Toronto Maple Leafs, and will occasionally make chicken chow mein to die for. His life is accompanied by a soundtrack composed by John Williams, and James Earl Jones provides occasional voice-overs.
Posted by Kevin R. Tipple at 12:30 AM

Absolutely my all-time-favorite Nero Wolfe novel, precisely because it so radically deviates from the norm. It is, however, definitively not the novel in the series to start with because of that deviation.

One of its other notable qualities is that it's a fairly-clued whodunit, which many of Stout's novels and novelettes were not.

Many of Wolfe's most entertaining cases were those in which he had to leave the house, but none were as wild as In the Best Families. And Wolfe never looked or behaved the way he does in this one.

I consider THE GOLDEN SPIDERS the best Nero Wolfe mystery, but IN THE BEST OF FAMILIES is right up there.