After recently reviewing THE TIGHTROPE MEN by Desmond Bagley, today Barry Ergang reviews something entirely different with Hail, Hail, Euphoria! by Roy Blount, Jr. Make sure you check out Patti’s blog for the other reading suggestions today.

I’ve been a Marx Brothers fan for as long as I can remember. Groucho is the first one I saw in early childhood on “You Bet Your Life,” his quiz show which started on radio and later aired on television. My maternal grandmother, who lived with us, preferred listening to radio rather than watching television programs, and I have a vague memory of listening to “You Bet Your Life” on radio with her one evening, then a night or two later watching the same episode on television with my parents. 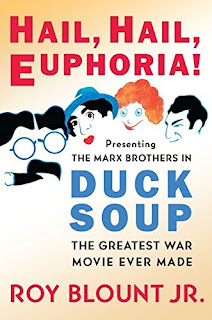 Eventually I must have seen Harpo (and possibly Chico) guest-starring on TV, as well as some of the brothers’ films. In any event I loved the comedy, even if as a child I didn’t understand the wordplay between Groucho and Chico that I came to love later on.

This brings me to a digressive reminiscence you can read or skip over. Back in the late 1960s or early 1970s, there was a Marx Brothers revival, and a local movie theater ran their classics over a period of several weeks. One of my closest friends and I attended several showings. On one of them—I don’t recall which and it doesn’t matter—someone in the audience had brought his very young son. Every time Harpo appeared on the screen, the little boy erupted in laughter and his father tried to shush him. It bothered me. Nobody else in the crowded audience voiced any objections—the child’s laughter was infectious—and I silently wished the father would be the one to shut up. His son, although too young understand the wordplay, loved Harpo’s antics, so why not let him revel in them? I can only hope that when he grew older, the kid came to appreciate the Marx Brothers as I and so many others have.

Which brings me to Hail, Hail, Euphoria! by humorist Roy Blount, Jr. I discovered its existence several months ago, as of this writing, when it was offered in an e-mail I received from one of two e-book sites I subscribe to: Early Bird Books and BookBub. Its subtitle is “Presenting the Marx Brothers in Duck Soup, The Greatest War Movie Ever Made.” I’ve never considered it in terms of war movies, but it has not only always been my favorite of the Marx Brothers films, I’ve also long maintained that it is one of the greatest film comedies ever made. So of course I had to have this book, according to the author of which “In 2009 an international panel of critics voted Duck Soup the thirty-seventh greatest film of all time.” 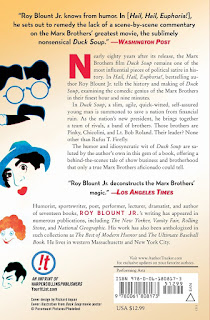 Roy Blount, Jr. goes through the film scene by scene, offering his personal observations and analyses. I found some of his attempts at humor more than a little strained, and some—but not all—of his analyses and efforts at “critical insights” to be confusing and/or pointless meanderings. What really worked for me were passages of biographical information about the Marxes themselves, Duck Soup’s director Leo McCarey, how some of the final screenplay and what wound up on-screen diverged from the original, and the making of the film itself. Here’s an example of a Marxian anecdote:

“Groucho once interrupted a charity tennis match between himself and Charlie Chaplin by spreading out a picnic lunch on the court and eating it as Chaplin fumed. Harpo would pick the pocket of another guest at a garden party, count the money, slip the wallet back into the guest’s pocket, and then bet the guest a hundred dollars he could tell him exactly how much money he was carrying. Chico had to go on the lam sometimes when he owed too much money to the wrong people.”

What worked for me might not work for everyone. Some might find the author’s analyses more penetrating and intelligible than I did. Were I to grade Hail, Hail, Euphoria! according to Internet book sites’ usual one- to five-star rating system, I’d give it a three out of five.

Ultimately, I’ll leave it to Marx Brothers fans to decide for themselves.

Derringer Award-winner Barry Ergang’s work has appeared in a multitude of publications, print and electronic. You can find some of it in a variety of genres in e-book formats at Amazon and Smashwords.