The second issue of Crime Syndicate Magazine proves that the first issue was not a fluke. Lightening does strike twice and it certainly did in this case. “Intense” and “edgy” are often over used clichés when applied to crime fiction, but they certainly apply here in several cases. 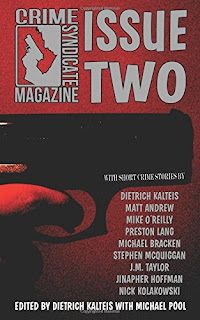 After a brief introduction by the boss, Michael Pool, Guest Editor Dietrich Kalteis kicks things off with his story “Bottom of the Ninth.” The Yankees are playing the Reds in the first game of the series. Gambler Nick Tuccirello has a lot riding on the game. Not just the pennant, but his wife too.

Readers go from 1939 to modern day Hawaii in “The Song Remains the Same” by Matt Andrew. Leroy is a music expert and is absolutely sure that certain classic rock songs should be played back to back. The DJ at KPOL “Oahu’s Best Rock Station” is seriously violating the rules. Kimo would rather get to the job on time than stop and talk music, but Leroy believes what songs go together are so important that they have affected how things in his life have worked out.

“Fight in the Dog” by Mike O’ Reilly takes readers to the brutal world of dog fighting. His favorite dog, Honey, is one heck of a fighter. She came to him by the way of Jimmy buying her from a guy known as Bobby Le Mas. The narrator does not like Bobby for multiple good reasons and is about to big time hate him. If you love dogs, this is a very tough story to read.

The young teen runaway is clearly out of place in the homeless shelter. Claudia, the counselor, does her best to make her feel welcome as well as get some basic information from her. Claudia is overworked and underpaid with few options at the Martinson Shelter. At least no matter what her situation had been the rich girl had far better options than Claudia ever did.

Samuel “Sugar” Cane is sitting on his back porch in Lacy Lakeview, Texas drinking beer and cleaning his .38 while sweating from the heat. “Sugar” by Michael Bracken explains where he got the gun, his history, and what he does as a collector for Tejano De La Rosa. There is plenty of work in the area around Waco. There are also some surprises along the way as he makes his rounds collecting money owed to his employer Monies paid by people who should have known better than to get involved in any way with Tejano De La Rosa. 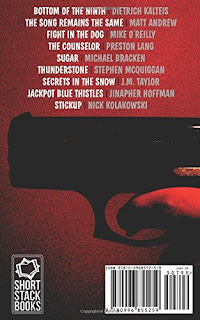 A typical night of drinking has turned into a bizarre and very dangerous game among the four guys. The guy known as Rat had the original idea, but Yak has taken things to a terrible new level this time in “Thunderstone” by Stephen McQuiggan. Backing out now would make things worse.

There are mysteries to tell about what went on that recent winter when the snows hit Boston so hard. “Secrets in the Snow” by J. M. Taylor tells a couple of these secrets including what happened to Billy Myers.

There has been an incident as “Jackpot Blue Thistles” by Jinapher Hoffman begins and there is a bit of a mess. Prissy, the maid, can handle the cleanup. She has the easy job, all things considered, despite the spilled blood. Miss Honey has a couple of other things to arrange including getting a replacement package from Mr. Jal for her client.

Alan Johnson opened his liquor store in 1982 a week after he had purchased a shotgun with a pistol grip. He knows the neighborhood and still believes he will never have to use it. In “Stickup” by Nick Kolakowski things change in many ways including Alan’s plan to never use the weapon.
After the nine stories, there is an interview with Guest Editor Dietrich Kalteis. Michael Pool talks to him about his new novel Triggerfish as well as writing crime fiction, upcoming projects, and various other things.

Issue 2 of Crime Syndicate Magazine is another very good read featuring complicated tales and characters that do what needs to be done one way or another. While there is not a laugh out loud like there was in the first issue, there are times when a nod and sardonic smile might play across your lips. The tales are all good ones that work on every level. Crime Syndicate Magazine: Issue 2 is also very much worth your time.

Material was picked up to read and review back in early May by way of funds in my Amazon Associate account.