Review: Black Coffee: Stories from the Noir Side of Town edited by Andrew MacRae

Edited by Andrew MacRae, Black Coffee: Stories from the Noir Side of Town. While defining what noir means can be difficult as Andrew MacRae notes in the introduction, the decision was made to let the stories included in the anthology define it. While there is commonality in the 23 definitions, there is also considerable variation and that means there is very little duplication of themes or styles. 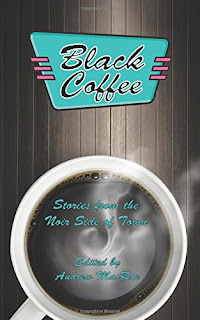 That process begins with “Diving for Dollars” by Peter Denton. Clarice and Simon are aboard their yacht, Searene, near Noumea, New Caledonia. They have been on the 70-foot yacht sailing around the world the last three years. Maggie has had enough of the boat, her marriage, and everything. Aboard the Reliant there is Jake who is known to take divers out to the best places on the reef. To the women on the yachts in the area he is known to do a few other decidedly non-nautical things very well.

Michael Bracken is next with his tale, “Deep in the Heart of Texas.” Rowdy Boyette still carries the picture of Stella who walked out of home and his life a year ago. A lot of beer has been consumed in the weeks since in a futile effort to ease the pain of her leaving. That pain might be eased a bit by the young blond stranded by the side of the road next to her car. She says her name is Andrea and has little more to say about her situation. His out of the way mobile home in the middle of nowhere in the West Texas could be just the place for her for now.

“Hotel Hate” by Michael Chandos takes readers back to the roaring 20’s to the Hotel Hatteras somewhere deep in the Michigan Woods. The three-story place catered to those types in organized crime that needed to lie low out of public sight. Everyone, even when there were members of rival groups, knew to behave themselves and not cause problems. Miss Rose keeps everything under control and has the local law for backup as well as business partners. A group of four bank robbers out of Illinois could be troublesome not to mention the fact that her ex and his buddies just arrived.

There is a touch of the otherworldly in “the Cat” by Karen Gough. The cat had always followed her around the house, the ranch, and even riding along in the truck. It acted more like a dog than a cat. Even after Mike killed Linda, the cat continues to show up.

Manny Rodriguez works as a prison guard on death row. He doesn’t throw the switch, but he does walk the prisoner to the chamber. In “Today You Die” by Herschel Cozine Manny is to escort child killer Hack Jensen to the chamber at the state penitentiary. Jensen never expressed any remorse and his attitude remains as bad as it was the first day of prison. Escorting him to the chamber is not going to be easy and Jensen is not an easy man.

The Reverend L. Davis White has quite the knack for eulogizing the recently departed. In “Killer Eulogy” by Warren Bull, the Reverend puts his talents to work to celebrate the life of Kenneth David Nelson. Some don’t care for him. One of those is Evelyn Ingram who again is going to make her complaints know to Bishop Darby.

Mirabelle works at Black Orchid Salon doing the normal things a hair stylist does. But, she has other skills in the tale titled “The Cleaner” by Wenda Morrone. One of those skills is chatting with difficult folks who show up just before closing time.

There just isn’t enough action going on to suit Detective Sergeant John Asher. 15 years in London and then he got demoted to the small rural town of Rutland. He has to find a way out in “Beefed Up” by Ross Baxter. Mickey Taylor just might be the answer one way or another.

In “Escape” by Steve Shrott, private investigator Paul Rosen has a huge problem. People want him in jail or, more likely, dead. A beautiful woman, a powerful senator, and much more are involved in this story that has a lot of moving parts. 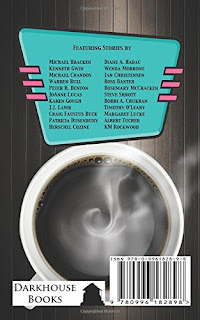 Being a bouncer in Las Vegas is a tough job. Booze makes everyone feel important. Vegas was built on booze and gambling. In “Bouncing” by Timothy O’Leary the latest idiot trying to push the line at Tao is a little guy at five and a half feet and full of attitude. He isn’t the only one with attitude this night.

Diana Andrews gets herself in some difficult situations. It does not always happen because she is a sex worker. In “The Full Hour” by Albert Tucher getting caught in the show home by a realtor and two prospective home owners was not the highlight of her career. Her sexual partner loved it though he didn’t have long to savor it.

KM Rockwood comes next with what just might be the darkest tale in the book. Sylvia has had it with Reginald. He cheats and thinks she should be okay with that in “Last Laugh.”

“Femme Fatale” by Margaret Lucke comes next  where Lisa DeVoe seems to have it all. Great husband, great marriage, great daughter. What she doesn’t have, she feels a compulsion to take.

A cat is just part of the story “Cat’s Outta The Bag” by Bobbie A. Chukran.  Julia Morgan has had yet another argument with her husband, David. To calm down and clear her head she is going to go stay at the cabin for a few days. Now that her sister, Jerri, knows her plans, she can pack, get the cat, and take off. The cabin is going to be the time away she needs.

Kamal though he had put the past behind him in “Crazy” by Rosemary McCracken. That was until Pawel showed up at the shopping plaza near where Kamal works in Toronto. Kamal ditched him a few months ago and thought he was safe, but Pawel is back. Getting away from him again could be much more difficult.

When you are throwing up in the alley, it is understandable that a murder at the other end of the alley might not have gotten your attention. Alex was the vomitor in “Family and Friends” by Jan Christensen. The cops want answers and don’t really buy his story. That is because he is not an actor. Though he tries to hide it, Alex knew Jane McGregor very well and now Jane is dead.

It is a rough neighborhood so the sound of sirens is a frequent occurrence. This time the scream of sirens involved Joey Hackman. He is dead thanks to having his brains bashed by his own bowling trophy. Jack Murphey, who most definitely is not a cop or a private investigator, intends to find out who did it and deal with his way in “Kegler Killer” by Diane A. Hadac.

Nick took Jen to Cinzano’s because that was the scene of their first date. She likes it when he goes sentimental on her. It was a nice evening until the obnoxious couple was seated at the next table in “Nor Death Will Us Part” by Patricia Dusenbury. That couple arrived and things just spiraled downwards from there.

Driving a taxi can be dangerous for a lot of reasons as there are some folks should never be in the backstea.t In “White Knight” by J. J. Lamb mid-week in San Francisco is slow time. So, when the guy wants a lift to Pacific Heights he is glad for the customer. Glad to wait for him while he escorts his beautiful date back to the vehicle because the minutes pass and the meter still runs. Where he wants to go next is a bad idea, but he is the paying customer.

She knows how to run her club known to all as the Blue Lady Lounge. It is simply the hottest place to be in Fresno. The unwelcome arrival of Mitch is trouble in “One for My Baby” by Joanne Lucas.

Warren Bull has a second appearance in the anthology with his story “A Christmas Journey.”  It is a brutally cold Christmas Day and the young man with a backpack and the basset hound in his arms clearly needs a ride. Gary has a load to take Wichita and the guy and his dog are headed to Waterloo, 40 miles outside of Wichita.  No problem to take them along as part of his delivery.

The final story takes readers back in time to just after World War II in Hong Kong. “The Kowloon Princess” by Kenneth Gwin. Flannery and Sims go ashore after leaving the freighter, S.S. Leftson. Lots have things changed during the Japanese occupation and now that they are gone and the war is over, the place is very different. But, underground business and back alley deals remain as do opportunities to find people.

The twenty-three stories in Black Coffee: Stories from the Noir Side of Town are all good ones. Edited by Andrew MacRae the read is a highly entertaining atmospheric mix of the past and the present. The authors showcased here provide complex tales where things are never black or white, but are varying hues of grey.  Much is at work in this read published by Darkhouse Books making this an anthology you definitely want to read.

I was gifted a copy of this book to read/review by a member of the Short Mystery Fiction Society who is not an author in this book and is not an individual involved in the project in any way.

Thanks for the shout-out, Kevin. And best wishes to you and yours.

A very nice rundown of all the engrossing stories in this anthology. Thank you for your pertinent observations.