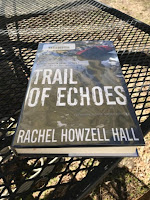 Trail of Echoes is third in the series that began with Land of Shadows and opens in the middle of March as the rains repeatedly pound the Los Angeles area. Free from her marriage to Greg by court decree and yet not free from his allure or many other ghosts physical and otherwise, Detective Norton’s plans for a normal lunch crash and burn. Such is the life when you are homicide detective for the LAPD and a body has been found.

Thirteen year old Chanita Lords has been found in a bag in Bonner Park. A beautiful park surrounded by homes owned by wealthy African Americans, it also is the site for the body of Chanita Lords. A teen that came from the same housing project that Detective Norton called home all those years ago. The young teen is one of several in the local area that have gone missing in recent weeks Who killed her, why, and is her case linked to the other recent missing  girls are just some of many questions to be answered in Trail of Echoes.

Like the earlier books in the series Trail Of Echoes is very good and well worth your time.