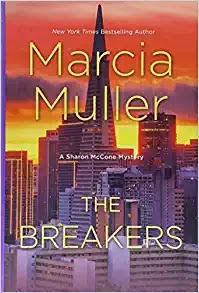 Marcia Muller released her 35th book about Sharon McCone last year. Sharon is one of the earliest contemporary female private investigators I could find. Of course there was Miss Silver who first appeared in the late 1920s and Honey West, who was a caricature of a PI in the 1960s. But as far as modern realistic attempts to portray a woman earning a living as a private detective, the first seems to have been Cordelia Gray, introduced by P.D. James in An Unsuitable Job for a Woman in 1972. Then came Sharon’s appearance five years later in 1977, followed by Delilah West in 1980 and Maggie Elliot in 1981. The iconic V.I. Warshawski and Kinsey Milhone both saw the light of day in 1982. Shortly afterwards the floodgates opened and readers had any number of women PIs to choose from, including taxi-driving Carlotta Carlyle and bartending Kat Colorado. Sadly enough, of the early arrivals only V.I. and Sharon are still around.
I found this series soon after it began and read each new entry with excitement. I was especially pleased to acquire the short story collections issued by Crippen and Landru. As reading options proliferated, I found it was harder to keep up with Sharon and her friends and, when she became obsessed with flying, I didn’t want to. The books during her flying phase read more like flight manuals than mysteries. Fortunately the emphasis on flying has all but disappeared but I still think I’ve missed a few of the later books because of that.
Sharon continues to operate her successful investigative agency in #35, entitled The Breakers (Grand Central, 2018). Her former neighbors, on vacation out of the country, have asked for help in locating their daughter. Michelle Curley used to feed her cats when Sharon lived next door to them, so Sharon is concerned to hear that Michelle hasn’t called her parents or responded to their phone messages in nearly a week. Michelle has become a house flipper, buying rundown properties and renovating them herself. Her current project is in a questionable neighborhood, known as The Breakers. While it was an upper crust locale at one point in San Francisco’s history, it isn’t now, and its denizens do not inspire trust. Sharon can easily believe that Michelle has run afoul of one of them but does not want to tell her parents that. While Sharon searches for a clue, Michelle’s parents suddenly stop responding to her calls, and the hotel where they are staying is evasive. Sharon is startled to find herself investigating multiple disappearances. In addition, crises within her family and her tight circle of friends demand her attention.
While the plot is competent and there are surprises at the end, what particularly intrigues me about this book, released 42 years after the first one, is the continuity in characterization. Sharon has a number of relatives and many friends, most of whom have been in every book. There may be as many as a dozen supporting characters in this series, yet I did not notice a single inconsistency between the behavior of the supporting cast, compared to earlier books. I don’t know how an author can maintain multiple threads over a significant duration like that, yet Muller does it. Intriguing! Those familiar with the series will not want to miss this one.