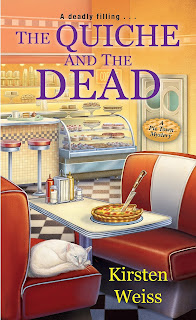 After her mother’s death and the end of her engagement, Valentine Harris’ dream of opening her own pie shop is the only thing keeping her going.  Her retro-look shop and delicious pies are starting to draw customers, but when one of the regulars keels over it looks as if Pie Town may  have to close before Grand Opening balloons deflate. Joe, the late customer in question, owned the nearby comic book store but, as it turns out, was a member of a group of amateur sleuths who tried to solve local mysteries.  Could one of the investigations have gotten him killed?

That’s the set-up in The Quiche and the Dead, the first in the Pie Town series. Val is a newbie business owner, but has a pretty sound head on her shoulders—which is more than can be said for Charlene, her 70-something crust maker who has an allegedly deaf emotional support cat and who lives and breathes conspiracy theories.  I’ll admit at first I found her annoying but since there’s a hint or two that Charlene may not believe in theories as much as she believes in yanking people’s chains, I not only warmed up to her, but she became my favorite character.

And it’s a good thing too because there’s already Heidi who owns the new health and fitness studio near Pie Town and promotes healthy living.  Really healthy living, as in putting up a huge sign that says “SUGAR KILLS” right after Joe drops dead.  She’s also dating Val’s former fiancé (who of course is a total slimebag) and exists mainly to cause Val trouble. It’s a character type I have little patience with, honestly, but they show up often in modern cozies.

The tone is gently over the top, with Charlene dragging a reluctant Val into all sorts of improbable situations, and can be very funny.  As the series progresses, more supporting characters are added, including the standard issue cop love interest, but there’s enough that’s fun and fresh to make this an enjoyable series.  Recipes are included.

In fact, I am going to check out some of Weiss’ other series, particularly the Paranormal Museum Mystery book.

The titles in the Pie Town series are: The Quiche and the Dead, Bleeding Tarts, and Pie Hard.